BK Mag’s list of the 100 Most Influential People in Brooklyn Culture should have just been called an Ode to Gatekeepers. Some felt it was a roll call of monied, privileged gate keepers summed up in two words: Mikhail Prokorov. Still others will claim it’s a tribute to gentrifiers, carpet baggers and outsiders.

But, hey, any and all lists like BK Mag’s are subjective. So why not pile on with our own completely subjective list of the 5 Brooklynites we felt should have been part of the 100.

Jake Dobkin, Gothamist: Everyone you know reads Gothamist. Dobkin and company have successfully recreated the water cooler for real New Yorkers (and the well assimilated) who want to share their irritation, bemusement and “outrage” over the daily grind that is living in this crazy city. You don’t get more “Brooklyn Culture” than that.

Otis Pearsall, Preservationist – Without Pearsall’s leadership in the landmarking of Brooklyn Heights 50 years ago, none of this “brownstoning” would have been possible. Much of Brooklyn would look a lot more like Queens by now.

Adam Suerte, Artist: A Cobble Hill native (pictured above), the tattoo artist and gallery owner is one of a small handful of folks who represent real Brooklyn Culture. And, he’s the designer of our “remixed” logo above too.

Jim Carden and Andy Templar co-owners, The Bell House, Floyd, Union Hall: Forget the fact that they created the most awesome idea ever – BOCCE IN A BAR at Floyd and later Union Hall. Carden and Templar opened the Bell House which is arguably the epicenter of the best of “Brooklyn Culture”. From DJ Steve Reynold’s Party Like It’s 1999, the annual Kentucky Derby Party (hosted by Michael Boyd), hosting many podcasts, the NPR show Ask Me Another, John Hodgman’s Ragnarok, and the list goes on. They have created a venue where the creative and unpretentious can thrive.

Jeff Strabone, New Brooklyn Theater, #SaveLICH : The educator and former president of the Cobble Hill Association has been a tenacious warrior in the effort to save Long Island College Hospital. At the same time as chairman of the New Brooklyn Theater, he staged a production of Edward Albee’s The Death of Bessie Smith INSIDE Interfaith Hospital.

Who else do you think should be on this list of The Omitted? We encourage you to add your own thoughts about who we missed in the comments below.

Cheeses Christ!! Waitress Gets Naked at Roberta’s, the Internet Reacts

A waitress at Roberta’s in Bushwick said farewell to the eatery on Friday by doing her shift almost naked. Twitter user @VickyOyomba ‏tweeted a photo of the incident showing the employee’s back with the words “Peace Out” scrawled across it. Yes, she was wearing fishnets.

The tweet has inspired the usual press lemming run:

Gawker led the pack yesterday asking the question, “Does the Fact That No One Is Talking About the Naked Waitress at Roberta’s Mean That Bushwick Is ‘Over’?” :

Bushwick is “the coolest place on the planet,” according to the Times, and yet no one seems to care about the naked woman waiting tables at its coolest restaurant — the sprawling, ramshackle pizza joint Roberta’s — on Friday night. I was there and I didn’t really care, though she wasn’t serving our table, and we were in a kind of post-traumatic stress situation after the two-hour wait and the Venusian heat of the wood stove-heated tent out back and the woman who called my friend a “whore” in the aforementioned tent bar for trying to sit down at a table on which she (the woman) claimed to have dibs. And anyway we only caught the waitress, surrounded by customers taking photos, while walking out, stuffed with pizza and duck and pork, and when we asked we were told that Friday was her last day, and the nudity did seem to be a kind of farewell gesture; she, or someone, had written “PEACE OUT” on her back.

As a former employee of the place, I can tell you the stunt was deemed awesome and the waitress is enough of a pro to not have ended up with food all over her crotch. Our only question is whether the Outdoor Topless Co-ed Pulp Fiction Appreciation Society is going to try to one-up her.

A Roberta’s source confirms that Friday was in fact the server’s last night, and that she has been working at the restaurant “since its inception.” Roberta’s opened in 2008, so after four long years of waiting tables, who among us wouldn’t want to rip off all our clothes and scrawl “PEACE OUT” in magic marker on our naked flesh? If anything, you’ve got to admire this young lady’s restraint.
Of course, the Never Nude buzzkills at Grub Street point out the NYC health code states that “employees who prepare or serve food products, or wash and sanitize equipment and utensils must wear clean outer garments.” Those fishnets look clean enough to us, so it’s unclear if the Health Department is going to take any action against Roberta’s. (And what about body sushi servers?) We called Roberta’s scantily-clad server several times today to find out more about her unusual choice of uniform, but so far the most famous naked waitress in Bushwick remains tight-lipped.

And BK Mag’s Virginia Smith is NOT amused:

Get it together, Roberta’s. Think of the first dates that could have been made excruciating by this! Not to mention the “hey mom and dad, here’s my neighborhood, I promise it is not a terrible joke of a place” dinners! Jesus. I shudder to think of it. But, then again, I don’t necessarily have all the answers. I guess it was her last day working, and that’s funny enough, and no one seems to have left in a huff or contracted food poisoning by virtue of a bare human ass in proximity to their expensive food. It all seems to have gone reasonably ok, other than the woman, who, per Max Read’s account of the evening over at Gawker, got all riled up about table space in the waiting area and called a member of his party a “whore,” which seems like sort of a blip.

Waitress Gets Naked in Bushwick, the Internets React

Gothamist reports today that employees of some Brooklyn Starbucks stores, including the Montague Street branch, are being asked to wear Brooklyn Nets hats to promote the team who are now playing at the controversial Barclays Center:

Gothamist: One employee at the Montague Street outpost told us the Nets advertising “started a couple of months ago when the stadium opened up,” and that wearing them is “required because the boss paid a lot of money for them. [Employees] don’t like them much because they’re big and constantly fall, but we have to [wear them] regardless.” However, a barista in DUMBO told us that they are not required, adding, “I don’t even follow sports, I just like the hat.” At press time, we hear they are keeping the mermaid logo at Starbucks, but are we that far away from it being replaced by the terrifying Brooklyn Knight? 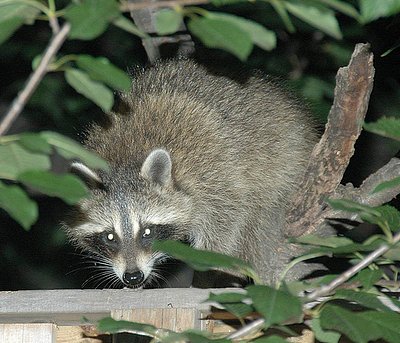 Our friends at Gothamist got some scary looking photos taken last night by Bobby Finger of a ragged looking one-eyed raccoon seen climbing a chain link fence next to a walkway adjoining Pier 1 in Brooklyn Bridge Park. The critter in the photo above is another, much healthier looking Brooklyn raccoon, caught on pixels by our friend Flatbush Gardener. You may recall our publisher Homer Fink’s encounter with a raccoon two and a half years ago, right on Willow Street!

The raccoon wasn’t the first instance of mammalian wildlife (apart from the unfortunately ubiquitous Rattus norvegicus or the familiar grey squirrel) to be spotted in the Park. Our man Karl found a muskrat living in a pond next to Pier 1 in August, 2010, and named him (or her) “Dodger.” Dodger hasn’t been seen since.

Gothamist updated their post to report that Park officials confirmed that the raccoon has been captured.