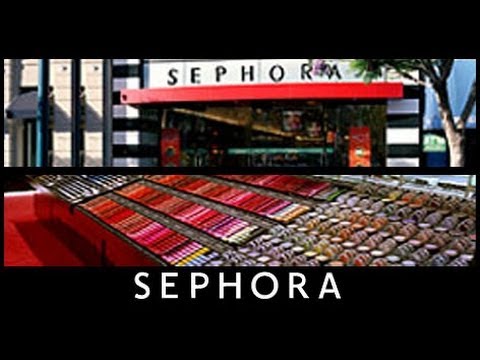 When we think “spa day” we think Karl Junkersfeld. Okay we don’t, so it’s extra special that our man with a cam was courageous enough to visit the new Sephora in Downtown Brooklyn and file this video report.

Karl Junkersfeld looks at the North Heights/DUMBO dining scene in his latest video – which also focuses on a recent fundraising event at his favorite haunt Noodle Pudding. Watch it after the jump. 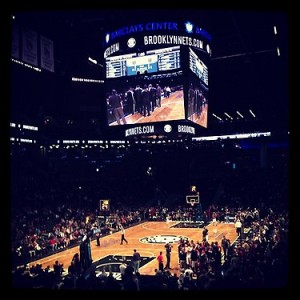 The Brooklyn Nets opened the pre-season last night at the Barclays Center. Check out Karl Junkersfeld’s report and fan reaction at the Brooklyn Bugle now. (Photo: Jason Shaltz via Instagram)

Mr. J. is a fan of all things Brooklyn Bridge Park. In the video (see after the jump) he’s given us some glimpses of progress in construction of the pedestrian bridge that will connect Squibb Park, just below Columbia Heights near the path that leads from Middagh Street, with Brooklyn Bridge Park. The poured concrete supports that will hold the wooden bridge aloft are being installed at the BBP level. He also shows work being done to improve the access ramp from the sidewalk at Columbia Heights down to Squibb Park. Sections of the wooden bridge are being fabricated offsite; we look forward to their arrival.

Our man with a cam, Karl Junkersfeld took a jaunt to check out Love Lane Mews and filed this report. After the jumperooski.

A Tree Falls on Henry Street 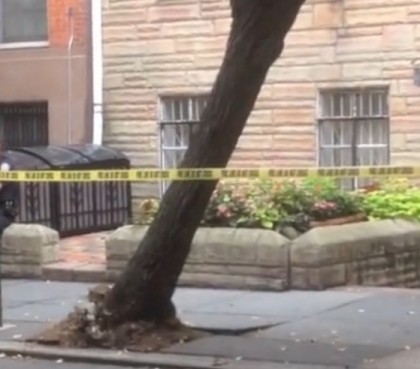 The War on Trees continues – A tree fell to its death on Henry Street near Clark yesterday. Karl Junkersfeld was there to capture it all on video. Watch after the jump.

Glenn Markman on Dellarocco’s, the Beach Shack, the Nets, and Brooklyn’s Future 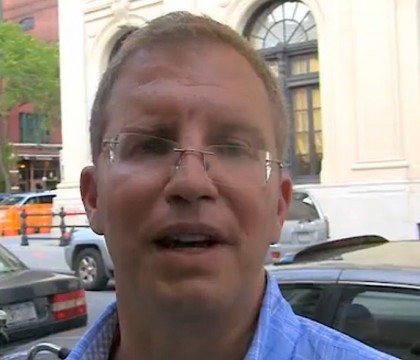 Karl and his cam got quite the workout Friday evening. Following his visit to the opera in Brooklyn Bridge Park and Dellarocco’s “soft opening”, he asked Glenn Markman about his views on his and his partners’ new venture, Dellarocco’s, and got an answer that extended to discussion of the new Beach Shack, Brooklyn Bridge Park, downtown Brooklyn, the Nets, the Bossert Hotel, Brooklyn real estate in general, and prospects for the future. Video after the jump.

Signore Carlo, before sampling pizza at Dellarocco’s soft opening, headed with his cam to his favorite local destination, Brooklyn Bridge Park, to catch some of the Metropolitan Opera’s performance there yesterday evening. Fortunately, he had some video of the 2010 Met performance in his now substantial vault, and so is able to show how this event’s popularity has increased. Video after the jump. 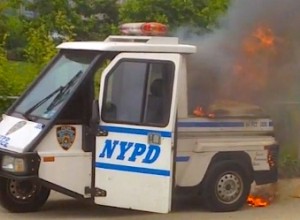 Karl and his cam were on hand around noon today when a small NYPD vehicle caught fire on the path next to Pier 1, Brooklyn Bridge Park, producing an impressive plume of smoke. He was able to get some good video until one of the gens d’armes (Hey! It’s Bastille Day) objected (update: to use a favorite Finkism, objected err somethin’). Video after the jump. 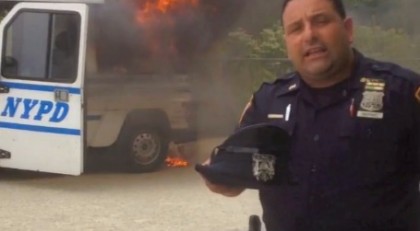 NYPD shoos Karl away from harm.

Publisher’s note: We would like to thank the NYPD officer who asked Karl to stop video taping the fire.  While commenters here seem to think the officer was attempting to stomp out coverage of a local news event,  we can only assume that the officer was only very concerned about Mr. J’s safety and we thank him.  Seriously folks, Karl wasn’t dancing or anything like that.