The NY Transit Museum will be holding a family party “Underground Summer” on Thursday, July 10, starting at 6 pm. Make a time capsule, learn about New York City’s two World’s Fairs, and see the cars that your parents and grandparents rode to the fair! Refreshments. For all ages.

The New York Transit Museum is located at the corner of Boerum Place and Schermerhorn Street in Brooklyn Heights.

June 25 Art and Mass Transit at the Transit Museum 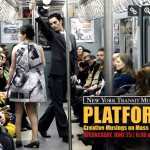 The New York Transit Museum’s PLATFORM: Creative Musings on Mass Transit returns on June 25 at 6:30 pm. In this crowd-sourced series artist/commuters perform or present their work. This installment includes storytelling, rhythm and dance, haiku, and a take on A Hard Day’s Night, all transit inspired.

On Wednesday, June 5th, at 6:30 pm, Ben Kabak of Second Avenue Subways will speak with Joseph Nugent, the liaison between New York City Transit and the New York Police Department. They will discuss counter-terrorism efforts and other security measures implemented in New York’s and other public transit systems.

Ben Kabak, the host of the Problem Solvers Discussion Series, is the founder of the blog Second Avenue Sagas. Joseph Nugent is retired from the NYPD; he has, among other degrees, a BS from St. Francis College.

The discussion will take place at the New York Transit Museum at the corner of Boerum Place and Schermerhorn Street. Admission is free but reservations, available here, are recommended. 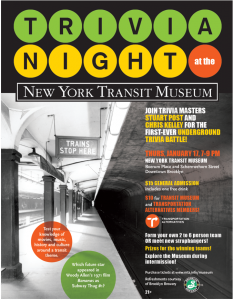 The event will be held at the Actor’s Fund Art Center, 160 Schermerhorn Street, Brooklyn. Admission is free but reservations are recommended.

For over thirty years, photos and biographies of New York women were displayed in subway cars as part of the “Meet Miss Subways” advertising campaign and beauty pageant. Young women of mostly middle and working class backgrounds were selected, not just for their looks, but for their hopes and aspirations. Meet Miss Subways: New York’s Beauty Queens 1941-76, opening on October 23rd at the New York Transit Museum, will look beyond the pretty faces and pageant sashes to expose a fascinating and invaluable record of the changes and challenges which have shaped New York women.

Photographer Fiona Gardner and journalist Amy Zimmer tracked down former contestants, taking portraits in their new surroundings and recording their stories. Gardner first became interested in the campaign after seeing the many pageant advertising cards displayed on the walls of Ellen’s Stardust Diner, owned by Ellen Hart, a former winner herself. Ms. Gardner began a long-term project to create new portraits of the contest winners, reflecting the reality of their lives some thirty years later. Gardner and Zimmer are working on a book to be released this winter . The project is sponsored by Artspire, a program of the New York Foundation for the Arts. Generous support was provided by Foto Care.

Originally conceived as a way to draw attention to nearby ads, Winners’ photos and biographies were displayed in trains throughout the city. The publicity often led to work in radio and television, and the contest became a compelling platform for civil rights debates in the city. In the 1940s, African-American advocacy groups pressured John Robert Powers, the modeling agent in charge of selecting winners, to integrate the contest, finally succeeding near the end of the decade. Thelma Porter, the first black Miss Subways,  was celebrated on the cover of Crisis Magazine.  In 1949, Helen Lee became the first Asian-American winner.

In 1963, contest selection opened up and the public voted for their favorite candidates via postcard. With this change, prospective Miss Subways aggressively marketed themselves to their communities and beyond. In the 1970s, the growing feminist movement and New York’s broadening fiscal crisis led to a decline in interest in the contest, which ended in 1976. In 2004, the MTA briefly revived a “Ms. Subways” contest in honor of the 100th anniversary of the subways.

At the Transit Museum exhibit, original pageant cards will wrap around the room at ceiling level, as they would have been seen by straphangers years ago. Modern portraits by Fiona Gardner will hang below. The Rush Arts Gallery describes her prints in this way: “Her photographs’ dramatic lighting references the glamour of pageantry, while the settings—homes and places of work—are the everyday spaces of the women’s lives.” In addition to the vivid portraits, visitors will be able to hear audio clips of interviews with ten women on antique phones placed around the room. The exhibition text, culled from countless interviews with Miss Subways winners and written by Amy Zimmer, touches on both personal revelations as well as larger social changes which impacted the lives of women everywhere.

On Thursday, November 29th, City Lore’s Steve Zeitlin will speak with Fiona Gardner and a former contestant about the significance of the Miss Subways pageant as a form of urban folklore. The event is free and will take place at 6 pm inside the Transit Museum. City Lore documents, presents, and advocates for grassroots cultures to ensure their living legacy in stories, histories, places, and traditions.

On November 11th and December 9th at 3pm, the Museum will host free events investigating the history of subway advertising as displayed in the Museum’s car collection and Meet Miss Subways exhibition.

The Transit Museum is embarking on a new year of Subway Sleuths, a special after school program for children on the Autism Spectrum. The program teaches social and problem-solving skills in a unique environment – a decommissioned subway station – and uses transit-themed content to engage spectrum youth. This year the Centers for Disease Control issued a new report estimating that 1 out of 88 children are diagnosed with autism spectrum disorder in the United States. Subway Sleuths uses a fascination for trains to help students navigate shared social experiences with their peers.

In a very short period of time Subway Sleuths has captured the attention of ASD experts, transit enthusiasts and Museum professionals alike. Organizations as diverse as the Portland International Airport and the Museum Access Consortium have turned to the Museum for consultation on implementing similar programs. Each session is facilitated by a special educator, a speech language pathologist trained in ASD support, and a Transit Museum educator. In 2011, Subway Sleuths’ innovative approach was featured on the front page article in The New York Times. The Museum will be part of a presentation at the American Public Transportation Association’s Annual Convention. The Museum has also been invited to participate in a proposed panel at the next convention for the American Alliance of Museums.

This fall, 7-9 year olds will meet on Tuesday afternoons at 4pm, and 10-12 year olds will meet on Wednesday afternoons at 4pm. The classes will start on October 2nd and 3rd, respectively. We will be holding thirty minute Observation Sessions on September 11th and 12th at the Transit Museum to form this fall’s cohorts. The observation sessions are a fun, informal way for staff to assess each child’s needs and tendencies, helping them assemble compatible participant groups and craft lesson plans. The program is offered on a sliding scale: for those in need the entire ten-week series costs only $25, thanks in part to a generous grant from Autism Speaks. Additional funding is provided by the Brooklyn Community Foundation, Tiger Baron Foundation, Warren Lewis Realty and individual donations.

To make a reservation, send your child’s name, age, grade level, school and parent/guardian contact information to Julie: Subwaysleuths@gmail.com or 718-694-3385

The New York Transit Museum is located at the corner of Boerum Place and Schermerhorn Street, Brooklyn Heights.

Ben Kabak of Second Avenue Sagas will talk with Caroline Samponaro, Director of Bicycle Advocacy at Transportation Alternatives, in the third installment of the museum’s Problem Solvers series on June 13 at 6:30 pm at the Transit Museum.

The discussion will focus on the City’s new Bike Share program, scheduled to launch in late July. Just as Metrocards revolutionized the subways 20 years ago, bike share supporters hope the ease of the new program will bring about a new wave of bicycle commuting. Riders will be able to check out bikes from 600 locations throughout the city by buying a pass for the day, week, month or year. Alta Bicycle Share, a Portland-based company, will manage the program.

Guest Caroline Samponaro is the Director of Bicycle Advocacy at Transportation Alternatives, an 8,000-member pro-bicycling non-profit founded in 1973. Caroline is one of the nation’s foremost advocates for cycling and has directed campaigns that address all areas of bicycling, from developing new neighborhood bike lane networks, to educating cyclists about their responsibilities on the road, to leading national roundtables of experts on public bike share systems. Caroline holds a BA in Cultural Anthropology from Columbia University.

The Transit Museum is located at the corner of Boerum Place and Schermerhorn Streets in Brooklyn Heights. 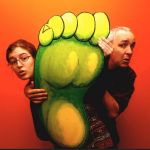 Looking for something to do with the kids over spring break? The Transit Museum will be presenting a 30-minute long, kid-friendly original musical, ‘Sharin’ a Ride,’ twice a day from April 10 through April 15 (show times are below). The musical, which knits together Earth Day and the transit system, make concepts like sustainability and carbon footprint accessible for children using sing-alongs and skits.

Suitable for children of all ages above age 4, the performance is free with Museum admission ($5/child, $7/adult).

The Transit Museum is located inside the subway station on the corner of Boerum Place and Schermerhorn Street, Brooklyn. More information is available here.