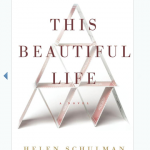 In “This Beautiful Life” Helen Schulman takes on a story of youthful illusion and treachery. The Bergamots, mother, father, teenaged son and kindergarten daughter, move to New York City from Ithaca, New York. Richard, the father, has taken on a high-profile job overseeing the development of an area of Harlem by a near-by world-class university. Jake, 15 ½ and Coco, 6, attend the Upper and Lower Divisions, respectively, of the Wildwood School. Liz, the mother, manages everyone’s lives. One night, Jake stays up in Riverdale, where the Upper School is located, to attend a party. The party is unchaperoned, and Jake hooks up with a girl a couple of years younger than he is. After the party, she sends him an explicit video that, because of Jake, goes viral. The many ensuing complications put the marriage and all the relationships in the family to the test.

Schulman does a tremendous job of showing the variety of ways the family’s relationships are found wanting. Liz realizes over and over the different ways in which she may have failed her kids, while Richard, the father, retreats into a hearty but increasingly fragile vision of success. Liz, a latecomer to the rarefied world of New York City private schools, often fails to understand the ambiguous cues for parental behavior. Schulman also suggests, early on, that there was a moment when Liz could have prevented the calamity, but, distracted by a hangover and Coco’s needs, does not.

Another motif is the wide gap between New York City’s haves and its have-mores. The Bergamots are not themselves in the 1%; Liz is a stay-at-home mom (albeit one with a Ph.D. in art history) and Richard works for a not-for-profit university. Through the children’s school, they meet and mingle with the 1%. Late in the book, Richard has a chance to move to an investment banking firm. Schulman explicitly evokes “The Great Gatsby” (among other ironies, the 13-year-old is named Daisy), perhaps best when Liz stands on an East Side block waiting for Coco to be released from kindergarten for the day. The book is a telling illustration of one of “Gatsby’s” great lessons, that a moment of carelessness can change several people’s lives forever.

“This Beautiful Life” offers a persuasive view of a particular swath of New York City life. Is it too close for comfort? Too far away to be credible? Let us know what you think in the comments.

Have a book you want me to know about? Email me at asbowie@gmail.com. I also blog about metrics.

Brooklyn Bugle Book Club: “Objective Troy: A Terrorist, A President, and the Rise of the Drone” by Scott Shane