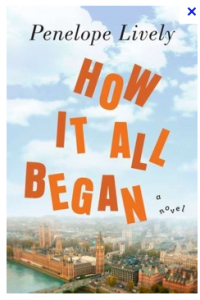 A mugger pushes 70-something Charlotte, who teaches English to immigrants, over on the sidewalk, breaking her hip and setting off a chain of consequences in lives that should be unrelated. Charlotte’s married daughter, Rose, is unable to accompany her elderly employer, retired academic Lord Henry Peters, to a speech out of town, so his niece Marion goes instead. Marion and Lord Peters miscommunicate, and his speech and the train tickets are left behind. Marion sends a text changing some plans to her married lover, and his wife reads the text – he has left his phone in his jacket pocket. Lord Peters is unable to reconstruct or recite his speech and so humiliates himself. At the luncheon before the disastrous speech, Marion is seated next to a charming hedge fund manager, and he hires her to decorate an apartment for him. Since she can no longer go out to teach her classes, Charlotte has one of her students come to Rose’s house for tutoring. He and Rose become friendly and. . . you get the idea.

Many unexpected consequences ramify in all sorts of directions and dimensions from these beginnings, and all the characters’ lives are changed as a result. Lord Peters, for example, spends much of the novel plotting to find a way back into the public eye. Since his chosen vehicle is television, things do not go quite as he had hoped. But his efforts create an opportunity for Mark, a young researcher who is clearly on the make. Marion thinks that she has hit pay dirt with her hedge fund manager until he stops returning her calls and, more relevantly, paying her bills. Marion’s lover and his wife struggle on, unable to divorce, unable to resolve their issues. Things work out well for some characters, and turn out in unexpected ways for others – ‘How it all Began’ is not a dark story. The mugger appears only briefly, on the first and last pages, an elfin figure who sets the plot in motion and is then of no further interest to any of the others whose lives he has upended.

Though the writing is blithe and, well, lively, this is not a glib novel by any means. It provides a thoughtful view of a cross-section of contemporary English life. We get a peek at a fairly broad swath, from the Upper Middle Class (unless his life peerage thrusts Lord Peters into the upper classes) through to the rough working class life of economic immigrants working construction jobs. Penelope Lively has a strong grasp of her craft, switching points of view readily and keeping the plot moving along nicely. This is a perfect book to give a convalescent, and is a pretty good option for a plane.

Have a book you want me to know about? Email me at asbowie@gmail.com. I also have a blog making numbers palatable to people who hate numbers here.

How it all BeganPenelope Lively

FASCINATING: 1940 Census Data Reveals Who Lived In Your Digs