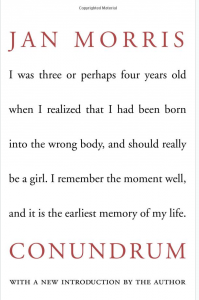 A few weeks ago I reviewed Jan Morris’s novel “Hav.” Reading that book and her book about Sydney, Australia, made me more curious about Morris, one of the earliest and best-known personalities to undergo gender reassignment surgery. So I read her book “Conundrum,” published in 1974 (and reissued in 2002). “Conundrum” begins with a vignette of the little boy James Morris, aged three or four, realizing “that I had been born into the wrong body, and should really be a girl.” In what is deeply felt and surely the most graceful of writing about transsexuals, Morris explains how she moved from James Morris to Jan Morris.

This book is the only vehicle Oxford-educated, Army-serving, Everest-climbing Morris has used to explain a story that riveted interest across the world. After the initial insight, Morris assumed nothing could be done about this conundrum, and describes a childhood and young adulthood of keeping a secret while attending the choir school of Christ Church, Oxford, and public school at Lancing. As James, Morris went into the Army at 17 during World War II, describes himself, “like a spy in a courteous enemy camp . . . caught up in the fascination of observing how the other side worked.” Morris put these observations to good use, building on them to become a writer. There was clearly sexual ambiguity, though as James, Morris married (and fathered five children). Morris clearly owes a huge debt of emotional gratitude to her children, who are described empathetically but whose privacy is carefully respected, and to her former wife (now her partner in a civil union). The book, while deeply felt, also skates across what must have been some thin emotional ice as Morris allowed her femininity to emerge, first through drugs, and then through several surgeries.

Morris’s sense of humor is evident throughout the book, particularly during the years when she had begun hormone therapy and was intersexual, sometimes appearing as male, other times as female. Morris clearly enjoys the pleasures of femininity, to an extent that, from the vantage point of 2012, is a little disturbing to a feminist – she writes of the comfort of slipping into being cared for from being the one doing the caring, in terms of doors opened and bags carried. As she acknowledges, she has missed the full experience of periods and pregnancy. And she movingly describes the process of moving towards acceptance of her often confusing self, suggesting that she must have suffered some serious depression. Since the book’s publication, Morris has not written or spoken much about the surgery, letting the book speak for itself. She makes the point that the process did not change her as a person, except in outward form; after the surgery she felt integrated and that she had gained her identity.

Morris has discussed in an interview with the Paris Review whether her sensibilities were changed. It’s a complicated answer, so I am quoting the question and answer in full:

INTERVIEWER
The very heart of this question is: do you feel your sensibilitiies at all changed?

MORRIS
That is a different question. The trilogy: I started it and finished it in the same frame of mind. But I suppose it is true that most of my work has been a protracted potter, looking at the world and allowing the world to look at me. And I suppose there can be no doubt that both the world’s view of me and my view of the world have changed. Of course they have. The point of the book Pleasures of a Tangled Life is to try to present, or even to present to myself what kind of sensibility has resulted from this experience. I’m sick to death of talking about the experience itself, as you can imagine, after twenty years. But I’ve come to recognize that what I am is the result of the experience itself. The tangle that was there is something that has gone subliminally through all my work. The one book I think isn’t affected is the “Pax Britannica” trilogy.

(Morris began “Pax Britannica,” a three-part history of the British Empire, as James, and completed it as Jan.) Let us know your thoughts in the comments.

Curious About Liquor Laws and Licensing?