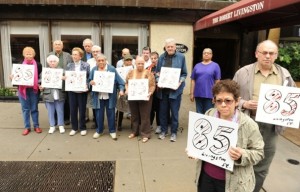 Residents of 85 Livingston Street at the Brooklyn Heights/Downtown Brooklyn border are battling a $60 to $90 a month rent hike for 30 or so rent-stabilized units in the coop building, saying it will “devastate” the mostly elderly folks living in those apartments. While the majority of the building was converted to coops in 1989, developer Mark Teitelbaum—who owns the rental units—insists that improvements to the building warrant the increase.

The New York Daily News reported Tuesday May 29 that Teitelbaum insists the hike is justified because he financed work to caulk and waterproof bricks on the building’s facade that co-op owners in the building decided to do.

The issue in question: Those renovations began in 2004, while Teitelbaum filed with the state Department of Housing and Community Renewal for the rent increase two years after the work was finished. Initially, his application was denied, but he appealed and the agency reversed its decision. On Thursday, DHCR issued an order upholding the rent increase, saying work on the building continued long enough that the application met the deadline.

In addition to the monthly increase of $60-$90 a month, Teitelbaum is demanding $2,500 in retroactive rent from each tenant. He originally owned 75 rental apartments in the building, and has sold them at market value as tenants moved out. Note: The Daily News story evades what seems to be an important detail: What the current monthly rent is for any of those 23-year stabilized units.

Residents insist the DHCR decree to increase rent isn’t valid, since Teitelbaum didn’t file for the hike until 2008. They also claim it will displace the elderly, including 94-year-old Margaret Cafiero, who has lived at 85 Livingston Street for 30+ years: “It’s putting a burden on people to raise the rent so much at one time,” she told the Daily News. “It’s like fighting City Hall; you never win.”

However, Deputy Commissioner Woody Pascal wrote about the Thursday decision, “At their core, the tenants’ primary objections are based on the impact of the increase rather than its supporting factual basis. DHCR must administer the increase in accordance with law.”

Zaida Concepcion, 62, another resident who has lived in the building 35 years, said, “He wants us out. He wants the apartments. He’s licking his chops, waiting for them.”

City Councilman Steve Levin (D-Brooklyn Heights), is siding with residents: “Almost every one of the renters are senior citizens, and many on fixed incomes. If these rent increases go through, some of these seniors may be out on the street.”