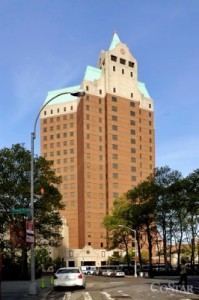 Mount Sinai Brooklyn Heights Medical Group has signed a lease for 75,060 square feet at One Pierrepont Plaza. The private medical practice will take the 17th and 18th floors in the 19-story tower on Clinton Street (300 Cadman Plaza) in Brooklyn Heights. After renovations, the tenant is scheduled to move in January 2013.

The space was previously used as a data center by investment bank Goldman Sachs, according to The New York Observer. The medical group will use the space for an ambulatory care office, urgent care, cardiology, general surgery, neurology and plastic surgery, among other medical practices.

FOR MASSIVE COMMENTARY ON THIS ISSUE, SEE OPEN THREAD WEDNESDAY, 5/30. IT HAS BEEN CO-OPTED AS THE DAY’S HOT TOPIC THERE.

Touring the Ships at Piers 7 and 8