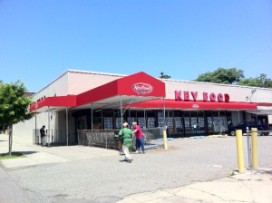 The closing of a supermarket is always an unexpected phenomenon, particularly when they provide the neighborhood with one of its core services. In Brooklyn Heights, Montague Street’s Key Food has been around for decades… Can you imagine the neighborhood without it? (Gristede’s: uh, personal opinion, yes).

On June 30, the Key Food on Prospect Avenue in Windsor Terrace is closing its doors—to be replaced by pharmacy mega-chain Walgreens—and Marty Markowitz is not happy about it. According to the Windsor Terrace-Kensington Patch, a deal was finalized last week following the retirement of the grocery’s 80-year-old majority owner. Some 50 employees are now out of a job.

The Key Food closing is so dramatic for the region that Brooklyn Borough President Marty Markowitz is weighing in: He calls it “a terrible blow to local residents left with few to no options for one-stop shopping access to quality, affordable food. It’s extremely difficult to compete with major drug store chains and banks that are over-populating neighborhoods.” See his full statement below.

The closing of Key Food on Prospect Avenue in Windsor Terrace strikes a terrible blow to local residents who are left with few to no options for one-stop shopping access to quality, affordable food. While I’m a firm believer in free enterprise, the unfortunate reality is that when it comes to buying, renting or leasing these locations, it’s extremely difficult to compete with major drug store chains and banks that, one could argue, are over-populating neighborhoods that are under-populated with full service supermarkets.

My office has long advocated for food justice and better access to supermarkets and fresh, nutritious foods in our most underserved neighborhoods, and this is a troubling reminder of why that fight has to continue. In fact, efforts will be made to convince Walgreens to provide a green grocer/fresh fruits and vegetables sub-tenancy or green market stall in Windsor Terrace as it has done in Bay Ridge and at other locations across the country to complement the limited food selection at their stores.

I have spoken with the president of Key Food Stores Co-op, Inc. and it’s my expectation they will make every effort to determine if another suitable site can be found to serve the residents affected by the loss of the Windsor Terrace supermarket.

How Sweet It Is: There’s Simply No Better Place For Wedding Portraits