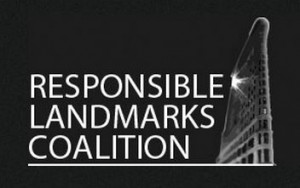 A group formed by the powerful Real Estate Board of New York that includes a half-dozen development and labor organizations, is sharpening its knives to rally against future Landmarks legislation in New York City neighborhoods. The new alliance—the Responsible Landmarks Coalition—is gunning to bring a cease fire to what it calls “the increasing prevalence of historic districts, a lack of transparency in the landmarking process and insufficient public input.”

The New York Observer reports that the Coalition insists the growing number of landmark buildings and historic districts are hampering the city’s economy and stymieing development. Their fury was fueled, in particular, by the February approval of the Downtown Brooklyn Skyscraper District, which the realtor groups tried with great might to squash. Their argument then and now: Creating a far-reaching historic district elevates “unspectacular buildings beyond their worth.”

In addition, the Observer says the groups were inflamed by approval of a Landmarked district on West End Avenue on the Upper West Side.

“We’re concerned that if you apply the concept of landmarks preservation too much, you resrtrict housing and impinge on other aspects of city life,” said Richard Anderson, president of the New York City Building Congress, a trade group for architects, engineers and contractors.

Peg Breen, president of the Landmarks Conservancy, counters that studies find that preservation increases or maintains property values. In addition, she questions the motives of the groups, given that only 4% of NYC is protected by Landmarks laws: “That leaves plenty of room for everybody else.”

In addition to the Building Congress and the Real Estate Board, the coalition includes the Manhattan Chamber of Commerce; three residential landlord groups—the Rent Stabilization Association, the Council of New York Cooperatives and Condominiums and the Community Housing Improvement Program—the Building Workers Union 32BJ and two groups representing construction unions, the Building Trades Employers Association and the Building and Construction Trades Council.