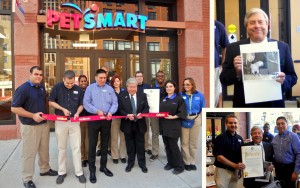 The new Brooklyn PetSmart mega-store at 238 Atlantic Avenue on the border of Brooklyn Heights, Cobble Hill and Downtown Brooklyn, is taking a bite out of the 20 or so mom-and-pop pet stores within a two-mile radius, according to a post on DNAInfo.com.

PetSmart opened last November to great fanfare, including a ribbon cutting by Brooklyn Borough President Marty Markowitz. BHB readers have had plenty to say on the topic (see below), with the scale weighting toward the chain’s fair pricing, spotless interior and attentive service.

But DNA reports on the downside of the chain store, quoting such local owners as Kil Chung of the 12-year Smith Pet Food in Cobble Hill: “The day PetSmart opened, my business started to go down. They are killing me. Only money counts.” Chung claims he will soon be out of business, because he can’t afford to fill his store’s empty shelves.

Pet Boutique and Supplies on Sixth Avenue in Park Slope has also seen a decline. “Of course PetSmart is affecting us,” says staffer Mike Saadi. “We can’t compete with their prices.”

But there are, of course, two sides to every story. PetSmart manager Scott Marcus offers that the 15,000sf superstore employs 35, most of whom live in Brooklyn. In addition, he says his staff has passion for animals and “are no different than the people who own and work at smaller shops. We have worked hard to show that we care about animals and want the best for our customers.”

PetSmart has also partnered with the community, running an adoption and rescue center, hosting regular events for charities and welcoming kids from local schools to learn about animals. As BHB reported at the store’s opening, it also offers the full-service Banfield Pet Hospital, grooming, accredited training and prescription foods & medications.

She’s Crafty wrote in April on the BHB Open Thread, “I’m falling in love with the PetSmart on Atlantic Avenue. Their house brand low carb dry food is great for my cat who can’t tolerate grains, and super inexpensive (also there are a slew of coupons in each bag). They have great staff, who (are) knowledgeable and sweet with the children.”

Reader Van added on BHB, “We took our 130-pound Newfoundland to PetSmart for grooming. They were great and about $25 cheaper than the options in the Heights. They have a lot of stock, prices are very fair and it seems like a well-run store.”

And Lori W: “I would love to support local businesses as opposed to a chain, however, the discounts and deals that I get at PetSmart are far better. If local businesses had comparable prices and offered incentives, I would shop there, however, as someone who needs to save money, every little bit helps.”

So what say you, BHB readers? How should the pendulum swing: toward lower prices and wider selection or reverence to local Mom & Pop shops?

BHA’s Third-Annual Dog Show: And The Nine Winners Are…