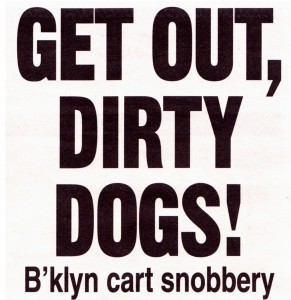 BHB pal/NY Post scribe Kate Briquelet takes Chuck Taylor’s BHB post about the hot dog vendor who dared to set up shop on Montague Terrace to a wider audience today in the tabloid’s online and print editions. (Editor’s note: The Brooklyn Eagle reports that the vendor – or any vendors – are not permitted by law in that vicinity, making his ouster less a function of calls to 311 and blog comments and more of NYC laws.  A city document cited by the paper clearly states that vendors are not permitted anywhere on Montague Street between Court and the Promenade.) 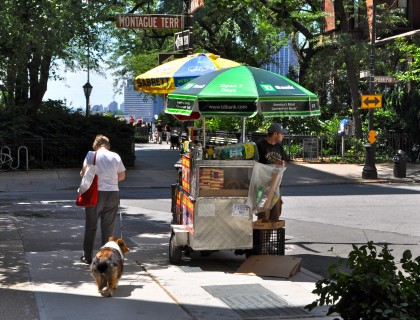 NY Post: Every hot dog has its day — except in Brooklyn Heights.

Snooty weenie meanies scared off a new hot dog vendor after he’d done only a few hours of business, slamming his street meat as “disgusting food.”
The brave cart-pusher parked on Montague Street near the promenade at 10:30 a.m. last Saturday. By that afternoon, so many locals had called the cops that an officer gave him a ticket and shooed him away.
“He was a nice young man trying to make a living, but in this neighborhood everything is a protest,” said a longtime resident who watched the scene unfold from Montague Terrace.

“He said something like, ‘Well, this is life.’ He packed up his belongings and left.”
He hasn’t been back — but days later, anonymous neighborhood residents were still spewing their venom against him on the Brooklyn Heights Blog.

The piece goes on to quote many of the 60 comments made on the story here  focusing on those who went hog wild on the intrepid (or clueless?) vendor.  As of press time, no comments have been made on the Post’s story.

However what we’re really concerned about is – ahem – BHB’s close-up:

Chuck Taylor, a blog correspondent who welcomed the vendor in a controversial online post, couldn’t believe the piping hot reaction.
After all, the Heights hasn’t seen a street vendor at the end of Montague Street for years.

“People need to step back and realize nobody owns a New York City neighborhood,” said Taylor, a 12-year resident of the Heights. “It is to be shared by all who call it home and all who visit.”

“If something so minuscule as a hot dog vendor raises the ire of the neighborhood, that’s what I’d call snobbery.”

Mohamed Hmidat, who owns the permit for the cart, but doesn’t sell franks himself, said his employee will steer clear of the neighborhood.