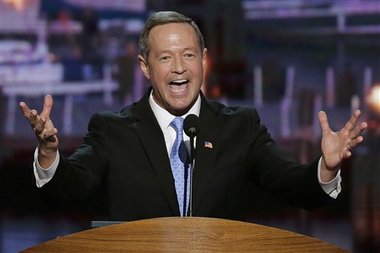 Brooklyn Heights got its very own shout-out during the opening night of the Democratic National Convention in Charlotte Tuesday night, as Maryland Gov. Martin O’Malley opened his speech with a odd little rant about his home state’s history some 225 years ago.

Within the first minute of his adddress—which aired just before the 10 o’clock hour (no major network coverage, but MSNBC and PBS were on it)—the guv said, “Since the first days of the American Revolution, Maryland has been called the Old Line State because of this true story of a group of soldiers called the Maryland Line: (etc. etc. etc.). It is August 27th, 1776, two months since our Declaration of Independence. Outnumbered and surrounded, Washington’s army is about to be crushed forever at Brooklyn Heights. The British are closing in.”

He goes on for another minute about Maryland’s deep-rooted history, before transitioning into a relevant point: “Together with President Obama, we are moving America forward, not back.” (Read the full text of his speech here.) Go, Brooklyn Heights! Yes we can! (Photo: AP)