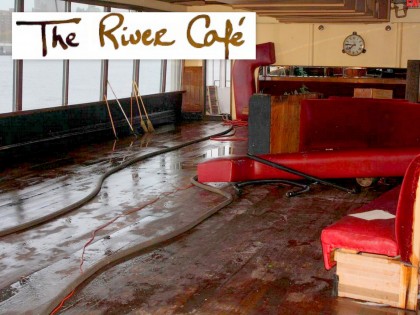 Sad news: With major flooding in low-lying DUMBO from Hurricane Sandy Monday night, eateries Bubby’s and Governor suffered major damage. But it appears that the iconic River Café beside Fulton Ferry Landing was all but destroyed by the storm. Huffington Post reports that water reached the restaurant’s doorstep by Monday morning’s high tide at 8 a.m.—and by nightfall, the evening high tide and the storm surge “completely wrecked the restaurant,” with water 3 to 4 feet deep in the dining room and kitchen.

Flooding covered the floors in mud and silt and knocked around the dining room’s red leather banquets, while completely destroying all kitchen appliances, except the range. A valuable Steinway piano made for the restaurant was also destroyed. Owner Michael “Buzzy” O’Keefe says, I built this place. I’ve been here since the beginning in 1977. I’ve seen lots of storms, but there’s never been anything like this.” He estimates millions in damages.

HuffPost adds that the restaurant was open for dinner Sunday night, after which O’Keefe and his staff moved all furniture into the terrace room, as far as possible from the river, then went home. O’Keefe was on the restaurant premises for part of the evening Monday, but with “the wind so strong that he couldn’t stand up straight,” eventually he was forced to seek shelter at his apartment in Brooklyn Heights.

He says, We won’t be able to open for a long time. Probably not for weeks or months. I had regulars calling me yesterday asking if we would be open. I said ‘no,’ so they asked if I would be open tomorrow or the next day. I didn’t quite know how to respond.” More, including pictures, at Huffington Post, here.

New York Marathon Is On… So Far