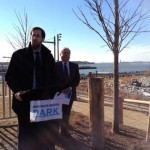 Sen. Daniel Squadron established a petition on Wednesday, January 8, calling for the East River Ferry service to stop at Pier 6 at the foot of Atlantic Avenue year round. This follows an official request from the New York City Economic Development Corp. that seeks proposals from ferry operators when the current contract expires in June 2014.

Squadron implores in a letter to the corporation: “Although not included in the RFP’s requirements for ‘core service,’ we wish to highlight the incredible demand for year-round service to and from the Atlantic Avenue/Pier 6 landing at the southern end of Brooklyn Bridge Park. This expanded service would serve residents, local businesses and our city alike.”

The petition—which Brooklyn Heights residents are encouraged to sign—mandates: “We, the undersigned, urge NYCEDC to encourage respondents to the RFP for an East River Ferry operator to include year-round service to and from Atlantic Avenue/Pier 6 in their proposals and only award a contract to an operator that includes this service.”

Peas n’ Pickles Completes Expansion With New Name: ‘All In One Mart’