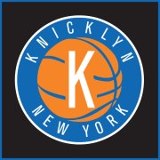 So you’re a lifelong Knicks fan. You’ve spent all of your life in the New York area, much of it in the five boroughs; you’ve lived in Brooklyn for four years.

You’re a lifelong Knicks fan. So what you do?

If you’re Mike from Gowanus—who’s got the perfect name for a sports-talk radio caller—you create…Knicklyn.

Knicklyn is a website…and a state of mind.

“I’m a resident of Brooklyn,” said Mike, who asked that his last name not to be used, preferring to keep his site separate from his professional life. “I’m a devout Knicks fan. And when the Nets moved, I just felt that a lot of people were supporting the Nets kind of blindly, which I get, because there’s a lot of pride in the neighborhood.

“But I felt that there had to be people out there that wanted to be able to relate to the team that they’re loyal to. It’s a pride thing.”

Knicklyn was born when Mike started “fooling around” with some graphic art, which eventually grew into a website. It grew virally, he said, as Knicks fans in Brooklyn found the site, so he expanded into a Twitter feed, a Facebook page, an Instagram account.

This week, Knicklyn started offering hats and stickers for sale, in response, said Mike, to user requests.  Aware of his brand as the Knicklyn logo started to spread, he wanted to capitalize on the interest before someone else latched on to it.

“With so many social media streams,” he explained, “the art was starting to spread without any real credit, and before anyone could compromise the integrity of what I was trying to do, I started to produce some products.”

While admitting to some resentment about the people who have jumped from the Knicks to the Nets, Mike, a marketer by day, acknowledges the success of the Nets’ marketing scheme.

“I thought it was a little gimmicky—‘Hello, Brooklyn!’—but in Jay-Z, they chose the best person possible to be the face of the team; a lot of people from the neighborhood can relate to him,” he said.  “They did everything how you should do it, but some people see through it and their loyalty remains with the team they grew up with.” 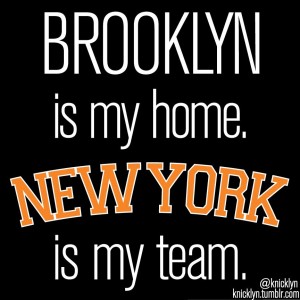 During Knicks games, the 26-year-old tweets commentary, engages in ardent debate with other fans, and after each victory, “tapes” the logo of the opposing team. Knicklyn’s Facebook page has more than 1,600 likes, and its Instagram account attracts regular commenters along with requests for Knicklyn gear.

In short, Knicklyn is doing exactly what Mike wants it to.

“Knicklyn is about bringing community together,” he said, “people who have the same passion and loyalty to both my neighborhood and my team.”