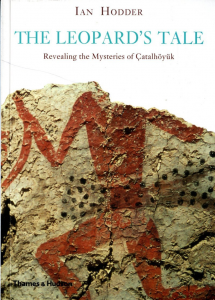 The archeological site Çatalhöyük, in central Turkey, was the site of a large (33.5 acres) and populous (3000 – 8000 people) town. It was occupied from between 7400 BC and 6000 BC, almost too early to call it a town. There are 18 levels of occupation – people filled in old houses and then built on top of them. The site was first found and excavated in the late 1950s and early 1960s. Ian Hodder is a Stanford anthropologist who is leading the excavations underway now. “The Leopard’s Tale,” is Hodder’s effort to piece together the daily lives of the Neolithic people of Çatalhöyük based on the interesting but perhaps somewhat sparse artifacts that have survived.

There’s a lot the archeologists can tell from the site at Çatalhöyük. People stored grains in baskets. In the early, lower levels of the site, cooking was done by placing heated clay balls into the food; by the later period of the occupation, cooking was done in vessels that could be placed in or over stoves to be heated. The occupants buried caches of obsidian and later retrieved them. They entered their houses from the roof; the stairs or ladders were generally placed over the stove. Floors and walls were plastered and sometimes had painted decorations. Sometimes the inhabitants plastered over the paintings – replastering was done regularly, sometimes almost monthly.

The inhabitants of Çatalhöyük also did some things that we might consider taboo today. (Hodder is careful not to use value-laden words such as ‘strange.’) They incorporated animal skulls, particularly horned ones, into the walls of their buildings. They buried (or possibly re-buried) their dead underneath the floors. Infants and neonates were buried near hearths; older men and women were buried under platforms away from the stove.

But there’s a lot more we don’t know, and Hodder uses his book to outline what the inhabitants’ beliefs might have been. Objects were hidden and then recovered, and Hodder argues that hiding and revealing were the “main symbolic and ritual elaboration” of the town. Shells and beads were buried with the bodies of young children, but not with those of older people. Hodder says, “it seems more likely that the object placed with young individuals have more to do with some form of protection.” It’s fascinating, but necessarily highly speculative. And sometimes he builds speculation on top of speculation.

The title is a case in point. Leopard imagery runs throughout the book, as Hodder’s thesis is that leopards were important yet some taboo kept the inhabitants from bringing leopard remains (at least the kind that survive: skeletons, claws, and teeth) onto the site. It’s a puzzle, as there are many drawings and sculptures of leopards, and paintings of people wearing what appear to be leopard skins. And it makes for a nice theme. Unfortunately, while Hodder’s excitement about the site is evident, and his explanations of what the archeologists have concluded from the excavations are very clear, the book is filled throughout with a tendency towards scholarly jargon. So it’s an interesting if not an easy book to read. Did you think the speculative/knowledge balance was set correctly? Let us know what you think in the comments.