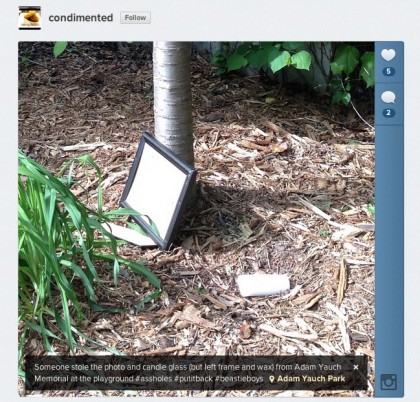 [Someone stole stuff] from the Adam Yauch memorial in the playground. weirdly, they took the photo and the candle glass, but left the frame and the wax.

The memorial was added the weekend of the park’s dedication to the Beastie Boy, who grew up in Brooklyn Heights. He died of cancer in 2012. The shrine included a 1995 photo of Yauch, a devout Buddhist, and the Dalai Lama taken in Boston: 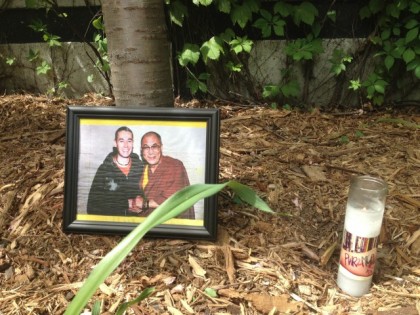 The memorial as it was (photo via KRRB)

Yauch’s fellow Beastie Boy, Adam “Ad-Roc” Horovitz, recently auctioned off limited edition Beastie Boys watches to benefit the park. They’ve since sold out but donations for the park’s upkeep can be made here.

And while Adam Yauch Park is still a great place for kids to play, it is also becoming, like Jim Morrison’s grave at Pére-Lachaise cemetery in Paris, a destination for Beastie’s fans from around to world to pay their respects as these social media posts attest: