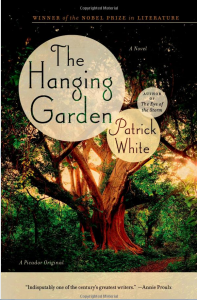 Who am I? Will I ever be at home anywhere? These are some of the questions that haunt the two refugees at the center of Patrick White’s novel “The Hanging Garden.” Or rather, they are at the center of what is evidently the first part of a manuscript that was found unfinished in White’s desk at this death in 1990. Unfinished novels are a problem, for literary executors and for reviewers – how do we know what the author intended? In his afterword David Marr, White’s biographer, makes a compelling case for publishing “The Hanging Garden:” White did not destroy the manuscript, unlike many of his other papers and letters, and kept working on it. Though it’s unfinished, the work stands on its own as a skilled and moving novella.

Eirene Sklavos and Gil Horsfall–the first half-Greek, half-British, the other Anglo-Indian–fetch up at the Sydney, Australia home of Mrs. Bulpit after they are evacuated from their homes, in Greece and London respectively, during the Second World War. Eirene is secure in the love of her mother, who has brought her to Australia after Eirene’s Greek, and partisan, father is murdered. Gil traveled with a group of boys. Both are well aware of their inconsequence on the face of a vast and indifferent world. Here’s White’s description of Gil’s arrival in Sydney:

Already the faces of the other boys his forced companions of so many weeks were closing against one another as a fresh phase of life swallowed them up. So he went and stood on the edge of the pier, on the edge of the harbour, which by now was a sheet of silver that was stitched with details of gulls’ wings. There was a smell of weed and shellfish rising as the sea sucked at slimy woodwork underpinning the world of human traffic.

Mrs. Bulpit lives in one of Sydney’s middle-class suburbs, Neutral Bay. Australia, Sydney, and Mrs. Bulpit herself are bewildering both to Gil and to Eirene. White is the only Australian to win the Nobel Prize for Literature, and his skills are in evidence throughout the book as he ably switches points of view from trudging Gil to lost-but-competent Eirene.

White is sly and subtle at describing class distinctions; in “The Hanging Garden” place is often a stand-in, one the children learn to understand. The Sydney Harbor Bridge appears and reappears. Just after Mrs. Bulpit has collected Gil from the quay, White says: “They were crossing the ghost of a great bridge.” Later, once circumstances force Gil and Eirene to move:

Asked Aunt Ally, ‘Where is Gil living now?’ She pursed up and answered, ‘With his guardian, I presume.’
‘But where?’
‘Oh somewhere–in Vaucluse.’ Her lips could barely speak the word.
‘Where is that?’ as though you didn’t know.
‘Somewhere out–the other side of the Bridge.’ Her teeth have had enough of whereabouts.
In Sydney, it seems, a bridge does not bridge, it separates.

I found this densely layered book to be a pleasure, with images that repeat and rearrange their meanings, and two children growing up in the most difficult of circumstances. I only wish I knew what White had planned for the rest of the book. What do you think might have been coming?

Have a book you want me to know about? Email me at asbowie@gmail.com. Check out my metrics blog at asbowie.blogspot.com.