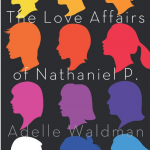 The naif who comes to the big city to make his fortune has a long and distinguished literary history, ranging from Thackeray to Balzac to McInerney. “The Love Affairs of Nathaniel P.” brings us Adelle Waldman’s modern take on the tale.

Nathaniel Piven came to New York after college (at Harvard, of course) to make a name for himself as a writer. The striving child of successful immigrants, Nathaniel has charted his course carefully, starting as a freelancer; at the start of the novel, he is on the verge of success, having just landed a book contract with a satisfyingly large advance. He’s happy but not smug, secure but not ready to give up his tiny apartment for better digs.

But things are far from perfect in what Nathaniel’s corner of hipster Brooklyn. His male friends are quietly competitive, in a jocular way. Despite Nathaniel’s literary success, his romantic life is far from satisfactory. As the book opens, he is on his way to a dinner party at Elisa’s apartment – Elisa being a recent ex-girlfriend with whom he has not yet broken all ties. On the way there he meets Juliet, another ex, who wastes no time in telling him he’s an asshole. And at the dinner party he meets Hannah, a friend of Elisa’s, with whom he soon becomes deeply involved.

Nathaniel’s romantic life is central to the novel, and Hannah is different from the women in his past. Nathaniel’s serious college girlfriend, Kristen, developed into an earnest medical student with no time or inclination for searching out the deeper hidden meaning in written works. His New York girlfriends have tended to the high-maintenance side, and even Nathaniel recognizes they are often glib and self-centered. Hannah, though, might be an exception or even a regression, Nathaniel is not sure which. While she is attractive, she’s not overly concerned with her appearance, either physical or intellectual. Like Nathaniel, she is a writer, though not as far advanced in her career. With Hannah, Nathaniel feels comfortable, at home, and liked, and much of the novel describes their developing relationship.

But Nathaniel thinks something is missing, and the good feeling turns to dissatisfaction. Nathaniel, it appears, is experiencing something new: competition from a woman who is his intellectual equal. Does Nathaniel put off romantic adulthood? Does his decision affect his emerging artistic maturity? Waldman’s resolution is nicely ambiguous.

A woman writing from a man’s point of view, Waldman is particularly adept at distinguishing different types of women. “The Love Affairs of Nathaniel P.” is an amusing glimpse into the lives of 20- (and increasingly 30-) something New Yorkers. How many types do you recognize? Let us know in the comments.