Everyone has their own special flower inside them. The creativity of dance is a wonderful way for one to express emotion and to share the joy of music with others. However, the long standing tradition of ‘IT’S SHOWTIME” on the NYC subway system has to end. While the efforts of the roving bands of break dancers (as we believe is still the vernacular) are quite impressive, most commuters would prefer a quite ride home without someone’s Adidas flying into his or her face.

Today's good subway karma: getting on the A train as the "It's Showtime!" guys are getting off.

Least favorite words to hear on the subway: "IT'S SHOWTIME"

Those 4 words that every subway rider dreads: "It's showtime New York!"

I wonder how many people these "It's showtime!" dancers have accidentally kicked in the face while doing subway dance moves.

*Those "It's showtime!" teens get onto my subway car* AAAAAAHHH! *jumps from car like Pee-Wee when the hobo won't stop singing*

I wish I could ride the subway ONCE without hearing the words "it's show time."

“Josh F” comments: they definitely have some impressive moves. they are also extremely annoying, and more importantly—dangerous.

in addition, they’re not all just a bunch of basically good kids. just a few days before this article was published, some subway dancers attacked a rider on the F train coming into manhattan.

he was taken to the hospital, while they just jumped off the train and vanished. thanks for all your hard work, cops…

In May a group of “It’s Showtimers” got into spat with a passenger and beat him.

…and anything that breathes life into that Media Deathstar must stop. 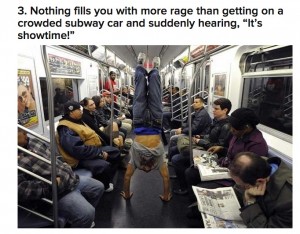 REMARKABLE INFORMATION: Jus’ Gossip and a Gaggle of Giggles