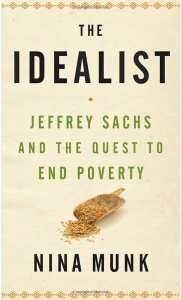 In her new book “The Idealist” Nina Munk, who followed Jeffrey Sachs as he developed what became the Millennium Project, describes a far-reaching but ultimately unsuccessful attempt to counter poverty in sub-Saharan Africa. Sachs, a Harvard-trained economist, made his name recommending economic “shock therapy” – radical austerity measures – to help national economies in trouble. His ideas worked in Bolivia in 1985 when the country had an annual inflation rate of 25,000%, and again in Poland in 1989. Sachs recommended similar measures when he was asked by Boris Yeltsin to help reform the Russian economy in the early 1990s, though the prescription did not work so well there. (When Munk asked Sachs about it years later, she says, he deflected blame, saying that his advice had not been taken.) In 1995, Sachs started paying attention to Africa, and observed its deep poverty and the many illnesses ravaging its inhabitants.

Sachs, Munk writes, was horrified at what he saw. His studies convinced him that years of too-little aid to African countries had not been enough to make a difference. Munk says that, as Sachs saw it:

The stumbling block . . . was a ‘poverty trap’: an overwhelming, interconnected burden of disease, illiteracy, high fertility rates, dismal agricultural productivity, lack of capital, weak or nonexistent infrastructure, debt hunger, drought, malnutrition . . . . Tackling one problem at a time, piecemeal, was pointless, he concluded. The way out of extreme poverty depended on a ‘big push’ in foreign aid–a massive, coordinated investment designed to life countries up and out of poverty, once and for all.

Sachs turned this vision into the Millennium Project, a large scale attempt to end poverty in Africa. Working village by village, the Millennium Project would allocate $120 per person to “implement the ‘interventions’ [Sachs] outlined in his book The End of Poverty: high-yield seeds and fertilizers, mosquito nets, better schools, improved health care and sanitation, bore wells and protected springs”, to name just a few. Munk observed and interviewed Sachs as he raised money and hired staff. She traveled with him when he visited Africa. The difference is that she stayed in the villages, exploring their geography, weather, and culture, where Sachs parachuted in briefly, then went back to teaching and raising money.

The theory was that the economic investment would, after about five years, result in sustainable growth. There are a lot of reasons why we don’t hear much about the Millenium Project these days, but the unavoidable conclusion of Munk’s book is that Sachs’ model was too simple. The weather, with its cycles of droughts and floods, was uncontrollable. Access to water was a big problem in one of the villages Munk visited, and while there was economic growth there due to the Millenium Project, that growth was unsustainable without regular access to water. Munk describes cultural differences that planners didn’t account for, making a persuasive case, for example, why it would make more sense to a villager to use a medicated mosquito net for an animal than for a human.

It appears from Munk’s reporting that unintended consequences overwhelmed the expected outcomes of the programs. One example she cites is telling: generally Ugandans don’t care for maize. Nonetheless, with Millenium Project seeds and fertilizer one village’s farmers grew a bumper crop. Storage facilities were inadequate, so villagers stored maize everywhere they could, including in their huts. The large quantities of maize attracted vermin. The farmers brought their crop to market all at once, depressing prices and bringing in less than the seeds and fertilizer had cost. Increasing yields was too simple a solution: the planners in New York “solved” one problem only to create another.

Human life is complicated: economic interactions can’t easily be modeled, and not everything can be predicted. Reading this book reminded me of the Biosphere 2 experiment, in which eight people attempted to live in a giant terrarium for two years. To his credit, Sachs created an impressive infrastructure and raised an enormous amount of money. Some of the villagers were able to maintain the gains they achieved while the project lasted. But, as Munk says, quoting the economist William Easterly, “Sachs is essentially trying to create an island of success in a sea of failure . . . and maybe he’s done that, but it doesn’t address the sea of failure.”

Munk’s thoughtful book is a sobering look at the impact this work had on the lives of real individuals, the villagers and the Millenium Project staff on the ground in Africa. Did you contribute to support the work of the Millenium Project? Would you do it again? Let us know in the comments.

Tale of the Tweets: The Brooklyn Book Festival