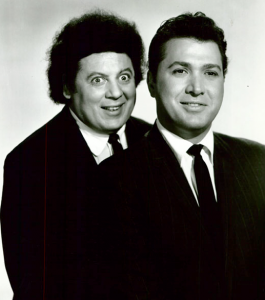 Well, I’m back in Brooklyn!  As you know, the United Nations Humor wing, The Federation International pour Le Cooperation Comique, sent me to Costa Rica to continue my work on perfecting the Spanish language version of the “That’s what she said” joke.  Generally, the trip was a success, but there were some problems:  For instance, due to faulty placement of a cedilla (that’s the little tail below the ‘c’) in a prototype version of the joke, two members of our party were nearly beaten to death by angry Friars outside of a tiny church in Monteverde.  But that paled in comparison to the gruesome fact that the FICC flew us on American Airlines.

Now, I could say a lot of horrible things about what a consumer and flyer-hating mess American is, but I decided it would be better to cite the words of two legendary entertainers, Steve Rossi and Marty Allen.  In 1968, this wonderful duo hosted a special on ABC titled Flyin’ High: Allen & Rossi & The Goldiggers Meet America’s Apollo Astronauts in Miami Beach in Living Color.  Anyway, an up-and-coming comedy scribe named Lou Costello Jr. penned a pile of Airline jokes for the special, and with Li’l Lou’s permission, I will paraphrase a few of ‘em here, as a way of saying a big, fat “Eff You” to American Dumblines.  Here Goes:

(Of course, Lou Costello Jr. didn’t write ALL those japes – I got some of the more “topical” material from Larry Sombrero, Paul Sherman, Bob Giordano, and Aaron Chapman, the wonderful authors of the great new comic musical, The Not-So-Merry Life of the Merry Mailman: The Ups and Downs of Ray Heatherton, In Story and Song.  Good luck with the show, boys, and don’t let all those cease-and-desists get ya down!  As I told you in my last fax, just change the character’s name to Rance Lentzel.)

But in all seriousness, American Airlines sucks harder than Al Pacino in the director’s cut of Cruising.

No time for the THE THREE DOT ROUND-UP this week.  But I’ll be back soon with another grab-bag of gossip, gags, groovy gabs, and great stories! Meanwhile…I STILL LOVE LIVING IN BROOKLYN!

Tim Sommer has been employed as a musician, record producer, DJ, VJ, and music industry executive.   He is the author of the critically acclaimed John Banner:  He Knew Plenty, and he continues his efforts to get the New York Mets to retire reliever Ron Taylor’s uniform number.