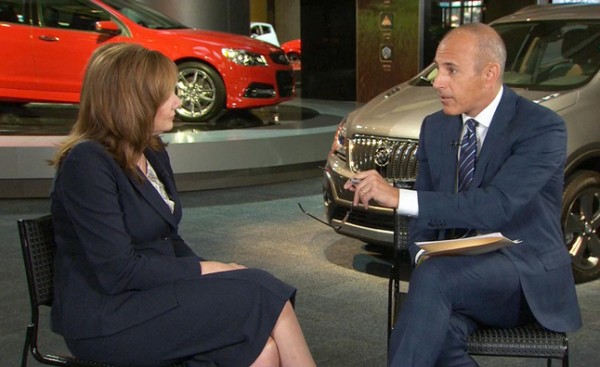 Matt Lauer‘s a decent interviewer, and clearly a successful broadcaster. But he’s full of it if he thinks it wasn’t a classic example of everyday sexism to ask a female CEO–of a company in the midst of a massive scandal–whether she can really be effective as a corporate leader and a Mom. Jesus, Matt, really?

But that’s what he asked Thursday on NBC’s Today, asking GM CEO Mary Barra this: “You said in an interview not long ago that your kids said they’re going to hold you accountable for one job, and that is being a mom. Given the pressure at General Motors, can you do both well?”

As has been pointed out by many on Twitter, there is simply no way in hell any interviewer asks that of a male CEO. Just won’t happen. Never. Ever. And that, by definition, makes Lauer’s unnecessary softball question sexist.

Lauer has since defended himself, pointing to the interview he referenced in setting up the question:

She had just accepted the job as the first female CEO of a major American automotive company, and in the article she said that she felt horrible when she missed her son’s junior prom. It’s an issue almost any parent including myself can relate to. If a man had publicly said something similar after accepting a high-level job, I would have asked him exactly the same thing. A couple weeks ago, we did a series on “Modern Dads” and the challenges of fatherhood today. Work-life balance was one of our focuses. It’s an important topic, one that I’m familiar with personally, and I hope we can continue the discussion.

A few problems here. First, just because a female CEO talks about her family does not mean it’s relevant or not sexist to pose the classic sexist question of can you do both. Why not add, “Sweetheart” at the beginning and gently pat her on the knee as well? I mean, clearly, she’s going to have to phone in one of those gigs, and God knows either the kids will suffer, or the shareholders will. Right?

And as to Lauer’s insistence that he’d ask a man the same question, I say I’m calling BS. (Obviously, the next male CEO to sit with Lauer will naturally be asked that question, but that’s purely going to be spin and damage control) “It’s an important topic,” he says. And they even did a series on “Modern Dads”! Modern Dads? I’d argue that’s just about as out of touch. You mean MEN CAN HAVE WORK AND FAMILY LIVES, MATT?

Detroit journalist David Shepardson notes Lauer never asked about this critical issue of Dads and work-life balance when he interviewed another automotive boss:

So if Lauer is to be believed, he would have followed up a statement like that by turning away from the news to focus on the family, right? But Jim, you say you care about your family. You’re a Dad and a corporate president. [leans in to pat his knee softly] “Sweetheart, given the pressure at Toyota, can you do both well?”

Matt, you’re full of it.