If I could anoint THE GREATEST LIVING HUMAN IN MUSIC, it’s pretty certain that person would be named Wilko Johnson.  If you DON’T know Wilko, the fluid-but-choppy hyper r’n’b guitar style he developed in the early/mid 1970s as a member of Dr. Feelgood made him, quite literally, one of the most influential guitarists of his era (right alongside Ronson, Thunders, and Townshend); virtually the entire first generation of English punk guitarists joyfully, proudly, and admittedly absorbed and/or stole his style, and if you’ve ever listened to the guitar playing of Joe Strummer, early-ish Costello, or Jam-era Paul Weller, you’re hearing Wilko;  in fact, both Strummer and Costello took it a step further, and “borrowed” Wilko’s staggering, stumbling, running and wide-eyed on-stage persona. The Feelgoods (whom Wilko left in ’77) were a profoundly influential band who played an amphetamine’d R’n’B that bridged the gap between the Pretty Things and the Clash, and they are an essential band.

For the last few years, Wilko has been spitting bar-chords in the face of what could be terminal cancer, continuing to perform and record and FAR exceeding his doctor-pronounced best-by date — he even found time for a small but VERY memorable reoccurring role in Game of Thrones (he’s the tongue-less executioner)…and JUST NOW, he’s released a FIERCE and driven album with Roger Daltrey, called GOING BACK HOME.  It brings Roger back to the charging, chugging mod’n’b he played in the early days of the Who, and there is literally NO ONE better to be his Roger’s retro/now-tro rock co-pilot than Wilko. 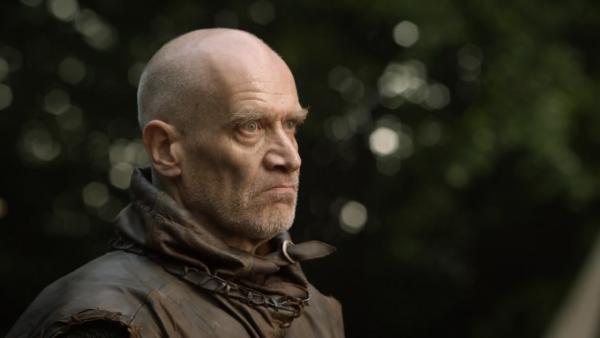 Johnson in Game of Thrones

Wilko Johnson’s courage is astounding and inspiring, he is one of the 25-greatest/most important rock guitarists of all time (and very likely in the top dozen), and we need to HONOR HIM.  And also, Dear Elvis Fucking Costello, everything you did/do on stage that people associate with Elvis Fucking Costello was STOLEN from Wilko Goddamn Johnson, so find a way to pay him back, okay?   And while you are at it, Elvis, please issue a general apology BEGGING US TO FORGET THAT THE JULIET LETTERS EVER EXISTED.  There’s a chance that The Juliet Letters ISN’T the worst album made by a major credible artist; but it’s a very, very slim chance.

I understand Dave Gilmour is readying a new Pink Floyd album for release (though the basics of recording, apparently, was done in the mid ‘90s, when Richard Wright was still very much alive).  GOOD FOR DAVID FUCKING GILMOUR.  He is a class act who “gets” what people loved about the Floyd more than that bitter snarling camel-faced Roger Waters ever did.  And if Roger wants to continue to fucking whine about this, let me state that he lost ANY AND ALL ability to fucking whine about what’s “really” Floyd when he fired Rick Wright during The Wall sessions because Wright was standing in the way of Roger’s personal vision (Wright toured on salary after that), Roger apparently having forgotten that IT WAS A FUCKING BAND AND MAYBE WE ALL GET A LITTLE TIRED EVERY NOW AND THEN OF LISTENING TO YOU WHINE, YEH, WE GET IT, we get it, WE GET IT, YOUR DAD DIED IN THE WAR AND YOU HAVE POWER ISSUES WITH WOMEN.  Go fuck yourself Roger Waters, THE BEST THING ABOUT FLOYD WAS ALWAYS SYD AND DAVE GILMOUR’S SHIMMERRING ARPEGGIO GUITAR, and Dear Mister Roger Waters get down on your knees and THANK GOD that John Fogerty is alive, because as long as Fogerty is alive YOU are not the bitterest and least-grateful person in rock’n’roll.

Yeh, so I am all for a new Floyd album, as long as it is with Gilmour at the controls and not Waters.

In an interview with my old friend Joe Bosso at MusicRadar, Fred Armisen lists the ten records that changed his life.  Number one, I SAID NUMBER ONE, is Strawberries by the Damned, an album I referred to in this column just last week!  And that DESERVES an exclamation point, dammit!  This is surprise of almost holy proportions and Armisen has now made me a fan for life.  The Damned are very likely one of the best bands of our era – you’ll recall, I mean I hope you recall, that in this VERY column I anointed them, via a process of careful academic analysis, The Most Underrated Band of All Time – and Strawberries is a MAGICAL album that comes from a delicious, almost Soft Boys/XTC land of power and whimsy, blending it with the kind of slashing ‘ello guvnor RAWWWWK that the Small Faces, the Who, and the Damned were KINGS of.  It is desperately hard to pronounce a “best” Damned album – Damned Damned Damned, Machine Gun Etiquette, and The Black Album all SERIOUSLY vie for the title (and any music collection that lacks these albums ain’t no music collection, in my book)– but when my ridiculously flat feet are held to the fire, I always say Strawberries is the best.  So good on ye, Mr. Armisen. 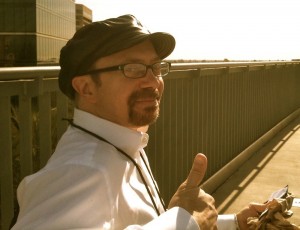 Let me also add that the aforementioned Mr. Joe Bosso is one of the last great purveyors of true music journalism, and his work at MusicRadar is a must read…and I was fortunate enough to see him KILL as Bon Scott at a lip-sync contest in the Weinstein Dorm cafeteria in the early 1980s.

It surfaced last week that Scott Walker and Sunn O))) will be collaborating on an album together.  Very, very little leaves me speechless but this comes goddamn close.

Scott Walker is, almost without ANY doubt, the most interesting and creative “mainstream” musician alive (I am defining “mainstream” as someone who achieved fame working in a the pop field, and had major pop hits); for the last 25 years, he has made extraordinary and essential albums that blend emotion, noise, fiery singes of vocals, blurts of rhythm, dark cinematic grind-scapes, and deeply literate lyrics; NO ONE makes music like Scott Walker, at least until the day all of Frank Sinatra’s work gets remixed by Mike Gira.  Walker’s stuff isn’t easy – imagine someone reading you Ulysses while sitting on a very loud lawn mower – but it is deeply brilliant, vastly moving and attention-demanding,his recent music is a tortured and incredibly well realized and executed map to the darkest landmarks of the soul and music.

ANYWAY,  Walker (whose praises I cannot shriek more loudly and whose absolute singular genius and commitment to skin-peeling, bone-chipping individuality at any costs I cannot possibly say enough about) is collaborating with Sunn O))), the drone/ambient/metal band who make Earth seem like Bon Jovi.

The Walker/Sunn O))) collaboration – being teased as Scott O))) – could be the end.  I mean literally the end of music, by which I mean OUR UNNECESSARY ATTACHMENT to boring and tired and aging constraints like western tuning and childish melody.  And I welcome it.  I am tried of this playground singsong shit masquerading as “new.”  It ain’t new.  It ain’t “different.”    Bring on the end, and I cannot fucking wait for Scott O))).

Finally, I have never once, not in my entire life, spelled “Ulysses” correctly.  I WAS BORN WHEN JOHN F. KENNEDY WAS PRESIDENT, I WAS BORN FOUR WEEKS BEFORE THE NEW YORK METS PLAYED THEIR FIRST GAME, WHEN I WAS BORN THE BEATLES WERE STILL PLAYING THE CAVERN CLUB, and I have YET to spell “Ulysses” without assistance.