Over the last generation, Mayors Giuliani and Bloomberg set out to transform the economic, physical, and social landscape of Manhattan in a way that would impact all future generations of New Yorkers.  To put it kindly, they wanted to make the city safe for economic investment and the interests of a white, money-spending and taxable upper class; we have seen their goals realized, in spades. 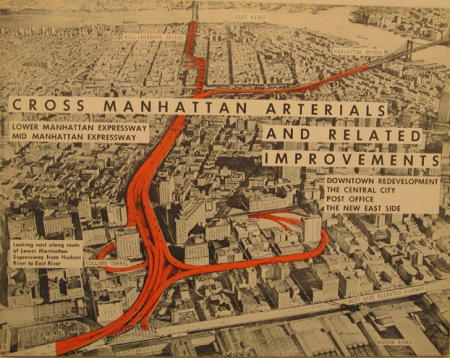 Eine Klienes Historikal Perspektiv:  From the 1930s to the 1960s, a curious and often despicable man named Robert Moses sought to transform the city, specifically the Island of Manhattan. He wanted to clean out anything that felt dirty, ethnic, unkempt, European, cloistered, crowded, and noisy, and replace it with sterile highways, sterile parks, and ugly high-rise projects. To a great degree, Moses succeeded, but by the 1960s, his power began to wane, and some of his most fearsome and destructive ideas – the Broome Street Expressway that literally would have obliterated Soho, the mid-Manhattan Expressway that would have turned most of midtown into a multi-lane freeway, the Battery Bridge that would have cast the skyline of Lower Manhattan into shadows — were ideologically refuted and ultimately cancelled. 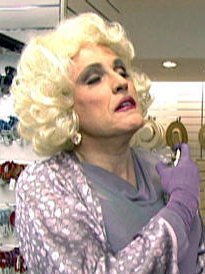 Bloomberg and Giuliani set out with many of the same goals as Moses, but with far greater scope and ambition:  rather than box the poor into sterile cubes, they would eliminate them entirely; rather than create freeways to encourage ease of suburban commute into Manhattan, they would make the Island of Manhattan, traditionally a land of nooks, shadows, sepia spires and Weegee-esque alleys, into a clean, poor-less paradise for the super-rich and the international megacorps that they help run.

For generations, I mean since the days of Cooper Union’s formation and the grim mudcity of the Five Points and the spiraling syllables of Melville, Manhattan had been the Kingdom of Outsiders, the only conceivable destination for Woollcott and William Burroughs and Woody Allen and Warhol and Dylan and Ginsberg and Verlaine; the only conceivable destination for anyone who felt rejected in the grey and green heartland, and who knew that their souls already lay in the Kingdom of Outsiders, a land of walk-ups and wishes, sluiced between two dirty rivers.

Bloomberg and Giuliani hated the Kingdom of Outsiders.  Their goal was to turn Manhattan into the Kingdom of Insiders.  Giuliani, that controlling, bullying pimp, took us about half way there; Bloomberg not only was going to take us the rest of the way, but was going to insure that his wishes would wreck Manhattan for generations to come, maybe forever.

Okay.  You’ve been reading a lot about the supertall needle skyscrapers, largely residential, sprouting up all over Manhattan like hair plugs on Adam Durwitz’s head (or, in a more timely reference, piling up like meaningless gifts in Derek Jeter’s garage).  Thin slivers higher than the highest skyscrapers, there’s been a lot of worthwhile chatter about how these are going to furiously alter – almost certainly for the worse – one of the most legendary skylines in the world. ‘Tis true, but the other damage these foreign-looking monstrosities will do will be far worse:  these supertalls (I think that’s the actual ‘accepted’ word for them) will be the domains of the super-rich; that is, quite literally and realistically, who they’re being built for.  Now, we are not just talking the rich, who have always given Manhattan a certain flavor, or even the really really wealthy, who have dominated the Island since Rudy G. made it his personal mission to evict the middle class from below 96th Street; we are talking rich rich rich rich rich, like Russian/Chinese/Saudi Billionaire rich.  That’s who these things, these fucking needles, are being built for.

When the architects and shills of big money start blabbing about these supertalls, they say they same horseshit Bloomberg said – that they want New York to become a global city.  First of fucking all, what they really mean is this:  We want New York City to be less, ohhhh, New York City-ish, and more like Bahrain or Hong Kong or Beijing.  And that fucking translates into WE WANT THE RICH TO NEVER HAVE TO SEE THE POOR.  Listen, here’s a handy reminder:  Anytime you hear anyone talking about wanting to make New York City a global city, tell them this:  WHAT THE FUCK WAS THIS PLACE BEFORE?!?  Schefuckingnechtady?!?

Now, back to the supertalls (what an awful word; if some coffee joint tried calling one of their drink sizes a fucking “Supertall,” I would say “Sirs, I am taking my coffee business elsewhere, and besides, I heard a Counting Crows song in this establishment yesterday, and therefore, you are dead to me”).   As stated, the plan is to shill the 10 to 75 million dollar apartments in these floating shithouses to Russian billionaires (and let’s not leave out the Chinese and the Saudis, and any fucker with fifty or so million lying around to waste on an apartment that will not be their primary residence).  AND LET’S NOT FORGET, THAT GAULEITER BLOOMBERG ACTUALLY SAID (and he really did say this, though admittedly I am just paraphrasing) that he wanted to make Manhattan safe for Russian Billionaires.

Anyway, New Yorkers won’t be moving into these things, shit, Americans won’t even be moving into them, which raises this point:  because these narrow palaces in the ether won’t be the primary residences of these fuckers, they won’t be paying into the New York City tax base.  Also, do you think any of these people are going to be patronizing all those groovy little Greek diners and all those yogurt shops and little cupcake stores or whatever the fuck it is that makes New York “New York” in the 21st century?  NO.  They will have their gourmet shit flown in or driven in from wherever the fuck these people get their gourmet shit driven in or flown in from.  Seriously.  You think Sergei Q. Billlionairski is going to eat anything from Gristedes?

And THIS will be the real legacy of the next stage of Manhattan’s ascension into a Bahrain-esque “global city” of the super-rich:  The local stores will no longer be patronized. They will wither and die. Even the high-end shops will wither and die, much less the places for the merely rich.  The diners will die.  The restaurants not patronized by pieces of shit whose bar fights are covered in Vanity Fair will die.  The newsstands will die, the candystores will die, the delis will die, anything not specifically geared to the billionaire or the tourist will die.

LISTEN, THIS IS THE REAL LEGACY OF BLOOMBERG, and the real estate deals and zoning laws he put into effect when he was making Manhattan safe for all his Private Jet-flying Pals:  Within our lifetime, Manhattan will be a ghost town peopled only by the very, very rich and the very, very poor. Mark my goddamn Counting Crow-hating words.  The billionaires will live high in the sky, not supporting local businesses and not paying into the local tax base, thereby engendering the collapse of any “normal” business; this will be complimented by the COMPLETE elimination of the middle class, upper middle class, “merely” rich, and lower middle class from the Island (of course the working poor were driven out a long time ago), a process initiated by Giuliani and largely completed by Bloomberg, but only to be fully realized via the  deals he set in motion;  and this will LEAVE NOTHING ON THIS ISLAND BUT THE SUPER RICH AND THE HOMELESS, except for a few spots of normalcy in Spanish Harlem, Washington Heights, Inwood, and maybe a couple of apartments right around the tunnel entrances.  The wheels have been set in motion to turn this lauded, legendary, transcendent, trashy city into a GHOST TOWN, and within our lifetime, It will be an ugly, peculiar ghost town…I give it 20 years…

…and it’s ALL Bloomberg and Giuliani’s fault.

These evil animals hide behind the word “global city,” because they look at the money and the hideous skyline of fucking Bahrain and Beijing and THINK that’s what a city is supposed to look like. GLOBAL CITY. NYC was already a global city, you awful, evil MEN.

And this was all written before I saw the news that the developers of the 40 Riverside Boulevard project, who had to allow some non-rich people to live in their building so they could get some land abatement or tax break or whateverthefuck, are aggressively petitioning the city to allow them to create a separate entrance for their poorer residents.  And what is this Riverside Boulevard crap!?!  The name Riverside Fucking Drive was good enough for my parents when they lived there in the 1940s, but it isn’t good enough for you?!?  Are you insulting my parents?  Yes, they had their issues, but do not fucking act like you are better than them because you want to call it Riverside Boulevard.  Fuck You.

Net out:  the city is going to fucking hell, and not in a cute 1970s’ Robyn Byrd/Al Goldstein/Ritz Thrift Shop sort of way.

White Flags on the Brooklyn Bridge: Make No Mistake, This Was a Terrorist Act