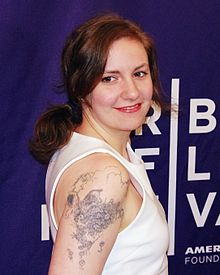 Writer Emily Gould has upset Brooklyn Heights resident Lena Dunham. Apparently the author of the new book Friendship has been using an anecdote about the “Girls” star and her boyfriend/rock star Jack Antonoff engaging in “PDA” at a party here recently. This resulted in Dunham reportedly (and rightly) direct messaging the author saying “you fully suck”.

Huffington Post: “I really wish that none of it had ever happened,” she told HuffPost Live’s Ricky Camilleri. “I’m a big fan of hers. I really am and I always have been. It was really disappointing to me that she felt like, because I had been outspoken in interviews about being jealous of her, she felt like she couldn’t support my book. I feel really hurt by it.”

The anecdote in question detailed the 28-year-old Dunham engaging in “elaborate PDA” with her musician boyfriend, Jack Antonoff. While Gould admitted that if she was in her shoes, she may not’ve “behaved any differently,” she still hoped for more from the actress.

Silly Millennials! This is hardly a good show biz feud. Take it from the masters Gore Vidal and Brooklyn Heights legend Norman Mailer. Ladies, this is how it’s done:

Break on Through: Remembering The Diamond