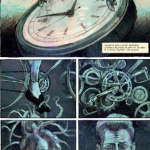 It’s one of the world’s glorious sporting events, followed, literally, by many thousands, and in news reports by many more. Because it runs down small side roads (mostly) it’s quite accessible, despite a complicated team and points structure. It’s been run for over a hundred years, and the Lance Armstrong cheating scandal is,well, not the first. Jan Cleijne’s beautifully drawn graphic history, translated by Laura Watkinson and Michele Hutchinson, provides a wonderful and enlightening introduction to the Tour de France.

First run in 1903, the inaugural tour, devised by a newspaper publisher to boost sales of a sports newspaper, was won by Maurice Garin; his lead of 2 hours 59 minutes is still the largest margin of victory in Tour history. Cleijne describes the first day:

On 1 July . . . fifty-nine cyclists set off on the very first stage of the very first Tour de France, from Paris to Lyon, a distance of 467 kilometers. The winner finished the following day. It had taken him 17 hours and 45 minutes. His average speed was 26 kilometers per hour on a bike that weighed twenty kilos with no gears, no brakes, no escort, no soigneurs, and no spare bikes.

After three weeks, ten thousand spectators watched the final stage, then as now, into Paris. In subsequent years, riders cheated; spectators interfered; gears, mountains, and intermediate sprints were added; and the yellow jersey decorated the Tour leader. The book is illustrated with fantastic pen and ink drawings that start in sepia tones – particularly appropriate for the years around 1914-1918 when, Cleijne writes, many cyclists were called up but never returned. Two frames tell the story: in the first, a soldier looks back at his bike, leaning against a tree. In the next, the frame is empty of people, the bike snow-covered. Cleijne adds color slowly, but the final frames – the book concludes with the 2013 tour – are full color. Whether you’re wondering what all the fuss is about, or already follow the race, “Legends of the Tour” is a terrific portrait of what has been, let’s face it, an often ignoble but immensely human event.

“Pen & Ink” also has a story to tell, or rather, a lot of stories. I need hardly tell you that tattoos are popular now (according to the HuffPo, as many as a third of millennials have tattoos). Every tattoo, it appears has a story, and “Pen & Ink” has collected some of them.

They are stories of memory – Andrea de Francisco, a cafe owner, has an RV tattooed on the inside of her arm:

She belonged to my Aunt, Uncle and two cousins, Sam and Nica. Together they explored the country every chance they got . . . It was in Canada on July 22, 2011 that the were hit by an oncoming semi-trailer . . . A fourth of my family was gone.

They are stories of self-acceptance. Roxane Gay says:

I hardly remember not hating my body. I got most of my seven arm tattoos when I was nineteen. I wanted to be able to look at my body and see something I didn’t loathe, that was part of my body by my choosing entirely. Really, that’s all I ever wanted.

The rest of the stories are equally interesting, or moving. The tattoos, themselves, oddly enough, are not nearly as compelling (though they are often quirky) as the stories. Tell us what your tattoo means, or the best tattoo story you’ve heard, in the comments.