Kill Yr Idols, Part II (of Many).  Let’s take a look at the Clash.  If you came of age in the late 1970s and early 1980s and defined yourself as a follower of new music, the Clash were a central band in your worldview. The Clash were so central, in fact, that one rarely stops long enough to make any sort of reasonable assessment of their recorded legacy. This has been even more difficult since the too-early death of Joe Strummer 12 years ago.

Likewise, The (truly) monument-like achievement that is London Calling tends to HANG over the (relatively short) career of the Clash like Andre the Giant at a birthday party:  If Andre the Giant showed up, chances are people won’t notice that the cake and the punch weren’t very good. 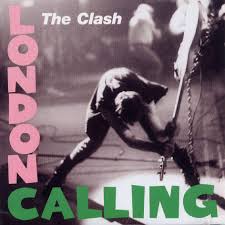 The author was at the show pictured on the front sleeve of this album. Good for him.

In fact, London Calling is such a remarkable achievement that it makes us overlook how singular it is within the Clash’s catalog, and I guess that’s what I want to address.  Arguably, it’s their only non-mediocre album; inarguably, it’s their only truly great one.  To put that into perspective, even Generation X put out two great albums, and the Damned and the Stranglers each have four inarguably great records;  the Clash’s most significant artistic competition, Stiff Little Fingers, put out four first-rate records, all worthy of multiple cursory and detailed listens, during the same years the Clash were active.  Now, I’m not saying that any of these bands are better than the Clash:  London Calling is one of the greatest and healthiest (in terms of concept and realization) albums ever made, and that counts for a lot.  It is just that we have to examine this possibility that it’s the only really good Clash album – and how does that impact their legacy?

The Clash began as the result of a fairly simple premise: Dr Feelgood plus Mott the Hoople divided by Woody Guthrie.  Their first album (and when I refer to their first album, I am talking about the initial UK release, not the American re-releases), is hollow sounding and rife with thin sloganeering.  A small handful of great songs (“Janie Jones,” “Garageland,” “Remote Control”) are surrounded by hastily-assembled collections of riffs and catchphrases; and a catchphrase + a riff does not necessarily add up to a decent song, as evidenced by “48 Hours,” “Protex Blue,” even “White Riot.” I would say this was a one-off problem, possibly a result of going into the studio too early and too eagerly, except for the fact that the band fell into the exact same habit again and again during their career (most notably on Sandinista!, but on Give Em Enough Rope, too). It also suffers from unsatisfying one-dimensional production – the Jam, for instance, got a lot more mileage out of equally thin material on their first and second albums, merely by having (far) better production (important note:  the American version of the first album is far superior, due to the addition of some of the Clash’s best and most unique material:  “Jail Guitar Doors,” “Clash City Rockers,” “Complete Control,” and “White Man in Hammersmith Palais” — if we were to count the American re-boots of the first Clash album as “true” albums, this would likely be a different story).

(Forecasting the beautiful diversity of the London Calling album, on “White Man In Hammersmith Palais” the Clash begin a song about feeling like an outsider at a reggae show with a reference to the Pretty Things)

Now, album two, Give ‘Em Enough Rope, sounds AMAZING.  The guitars roar and glow and twinkle and hum like well-built, well-tuned punk rock machines; they are recorded and assembled with a Boston-like precision though not with a precise Boston-like result; producer Sandy Pearlman never gets enough credit for making one of the most explosive yet sensible rock records ever recorded. But once again,with some too-few exceptions (“All the Young Punks,” “Stay Free”), on Give ‘Em Enough Rope the Clash seem to think coming up with a good tag line and a good riff is enough.  I mean, I can play “Guns on the Roof” or “Tommy Gun” over and over again because they sound so good, but really, they are barely songs.

Then we have London Calling.  London Calling is, well, everything: it sounds old and new and rough and polished and poppy and intimate and British and American, and for a brief moment in time, every aspect of the Clash’s potential is harnessed into a rail car rolling over the landscape of rock history. There’s never been an album quite like it – it combines the raw, literate wit and reflection of Mott the Hoople with the low-ceilinged pub-rattle of the Feelgoods with the cinematic big-picture glow of the Who and the roots sensibility of the Stones or Pretty Things. Although it doesn’t touch on any Beatles’ studio or song forms, with that one exception it is perhaps the most 360-degree picture of rock history ever recorded in one place.  London Calling is so good that we tend to overlook the fact that (with the exception of a few moments on Combat Rock, a couple of songs from the pre-London Calling Cost of Living EP, and the pile of first-rate singles that fell between the first and second albums), there’s almost nothing else like it in the Clash catalog.

I acknowledge that there’s a certain cult around Sandinista!, but can I just state that I don’t get it? I mean, at all?  The album sounds under-rehearsed (to the point of being spontaneous), over-recorded (i.e., many of the songs are as “written” as demos you hum into a tape recorder on the subway, but given full studio treatment), and so suffused with a pea-soup like fog of weed haze as to make the music virtually indecipherable to anyone who wasn’t in the studio at that time of recording.  “Lightning Strikes,” “Charlie Don’t Surf,” and “Ivan Meets G.I. Joe” are literally just titles, stretched out in unsatisfying ways into full songs; although some of the dub experiments threaten to work, they are ultimately pale failures; and the quasi-pop stuff – like “Hitsville U.K.,” “The Call Up,” and “The Magnificent 7”  – are minor zirconia, at best, made shiny by their stupefying surroundings.  Which isn’t to say it’s all bad:  there’s slightly over one side of grade-A-ish material here (“The Street Parade,” “Something About England,” “Lose This Skin,” “Somebody Got Murdered,” “Police On My Back” – and please note that two of those aren’t even written by the Clash), but even this is dulled by the hazy production, which is simultaneously overwrought yet incomplete.

Finally, there’s Combat Rock.  A pretty good record, but not a great one, and I could easily name a dozen punk-ish albums from the same era that are as good or better (for instance, every one of the four studio albums Stiff Little Fingers released between 1979 and 1983 are notably better).  It does, however, pick up on some of the same musical and lyrical memes explored on London Calling  (i.e., America, cars, and cities), and there’s a pretty strong indication that the band were finding their way back home again; which is to say, another London Calling was probably in them, if they hadn’t defenestrated (nevertheless, when is the last time you even thought of songs like “Red Angel Dragnet” or “Atom Tan”?).

And let’s not even discuss Cut The Crap, other than to say “file alongside Squeeze by the Velvet Underground.”

So…we have an interesting situation here.  The Clash made one album of shattering beauty, completeness, power, passion, and conceptual originality. They were also a devastating live band, and consistently so:  Strummer’s strained-vein passion, spitting out the news with his eyes screwed tight, really did honor his initial mission to re-cast Woody Guthrie for the punk era; this was complimented, rather brilliantly, by Mick Jones’ trad-rock stadium theatrics, leaps, kicks, and slashes, and Paul Simonon’s earnest, Dee Dee Ramone as handsome-simian passion.  I never saw the Clash play a bad show, and I saw about a dozen of them; each one of these contained the kernel of legend, each was full of color and acrobatics and sweat and joy; they were also one of those bands that was just as fierce and hot in soundcheck (I saw two or three of those), which is to say, they just loved being the Clash.

And ultimately, these two staggeringly important elements – the almost incomparable live performances, and one album of such energy, purity and creativity that it deserves a place in the collection of every person who has ever listened to rock music, regardless of whether they are an expert, faddist, snob, or novice – makes it not only possible but essential to overlook a very flawed catalog.