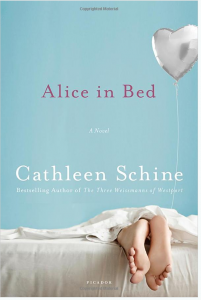 “Alice in Bed” is one of Cathleen Schine’s early novels, having been published originally in 1983, and reissued in 2012 after the success of Schine’s 2010 novel “The Three Weissmans of Westport.” “Alice in Bed” tells the story of Alice, a college student who is, for some reason, unable to move her legs without pain, and is hospitalized while doctors search for a cause or, at least, a cure. Halfway through the book, Alice moves to a rehab center, where she realizes that there are people a lot worse off than she is.

Alice is a lively young woman, and clearly does not like being cooped up in the hospital. But when her friends, family, and lovers come to see her in the hospital, she’s spritely all the same. She fights with the nurses and doctors, particularly about pain medication and its timing. She has inappropriate sex. She reminisces about an old boyfriend, whose mother comes for a visit. She writes letters to a friend who is in a psychiatric hospital, and possibly also worse off than she is. And life goes on around her – during Alice’s year in the hospital, her parents separate and divorce.

Part of the charm of the book is its regular reminders of Life Before – not life before Alice’s illness, life before the electronic age. The TV remote is wired to the TV (which is tiny, black and white, and fastened to the ceiling high above Alice’s bed). Telephones are wired and have rotary dials; no one has cell phones. People write actual letters, and mail is delivered to patients in the hospital. Patients don’t have computers or Internet access; visitors bring books and plants. (I guess we still bring flowers.) Patients didn’t control their pain medication through pumps; they gritted their teeth and waited for pills or shots. It was also the days before managed care, and Alice stays in the hospital for months; even after the move to rehab she returns once or twice to the hospital.

In his blurb, John Updike (yes! Updike blurbed the book) calls the book a caricature. But maybe it’s more of a metaphor? There are some references to “The Magic Mountain,” which Alice struggles with and gives up on, so it’s probably not a metaphor for life. Any other ideas? Let us know what you think in the comments.

Brooklyn Bugle Book Review: “Bad Boy: My Life on and Off the Canvas” by Eric Fischl

Curious About Liquor Laws and Licensing?