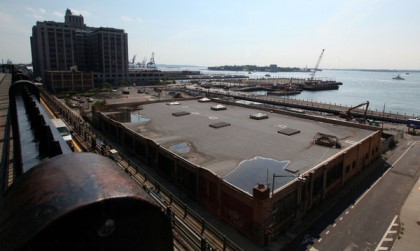 In a lengthy story titled “A $40 Million Gift, a Proposed Bike Arena and Now Skepticism in Brooklyn,” writer Lisa Foderaro ventures that Joshua P. Rechnitz’s pledge to build a field house in BBP—the largest single gift in the history of New York City’s parks system—was originally “heralded as a much-needed boost for the 85-acre waterfront park.

“But attention quickly turned to the centerpiece of the plan: a velodrome with a 200-meter inclined indoor cycling track and stadium seating for almost 2,500 spectators. Now, some parkgoers, neighborhood activists and community leaders are looking that donation in the mouth and saying, Thanks, but no thanks.”

Leaders of community groups in Brooklyn Heights and DUMBO are loaded with questions specifically regarding the track, the Times says, worried about the building’s size (with a footprint of up to 70,000 square feet, it is larger than a football field) “and the traffic it might draw to the cobbled streets of Brooklyn Heights, while pointing out the relatively obscure nature of track cycling, in which riders on fixed-gear bicycles without brakes travel at terrific speeds around curves banked at 45-degree angles.”

The NYT adds that some also doubt Rechnitz’s motives: a 47-year-old resident of the Upper West Side, he is an avid amateur track cyclist who has tried and failed to bring a velodrome to the city. Now, they say he is buying the track he wants on public land.

Joan Zimmerman, president of the Fulton Ferry Landing Association, tells the NYT she is concerned that the park was already being nibbled away by structures, and “putting this large of a building at one of the narrower necks of the park raises the question of what’s more important: green space or buildings?”

But NYS assemblymember Joan Millman, who represents Brooklyn Heights and the area containing the park, supports it, in part because it would replace a rundown storage building near Pier 5 that she calls an “eyesore.” And Regina Myer, president of the Brooklyn Bridge Park Corp., which governs land use in the park, emphasizes that “it’s not taking away any green space; the plan always called for that location to be a maintenance building.”

In any case, the Field House has a long way to go before it becomes a reality in BBP. The Brooklyn Bridge Park Corporation must still approve the plan, which will also require state approval. There’s much more to read in the Times piece here.