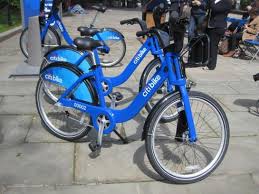 NYT: In light of these declaimed absurdities, I became determined to embrace bike sharing after having had reservations, not about the concept itself, but about its execution. Last week I set out for an inaugural ride with the goal of getting from Brooklyn Heights, where there are 10 Citi Bike kiosks (so many that it seems clear that Citibank pushed to have the heaviest presence in the most affluent neighborhoods to maximize promotion) to Pike and Monroe Streets in Lower Manhattan. There, in front of the Rutgers Houses, the Transportation Department was fitting people for free bike helmets, something it will continue to do in front of Housing Authority properties all summer. The idea was to get some sense of how low-income New Yorkers were responding to the bike-sharing program and how well it might serve them.

When I went to retrieve a bike at Clark Street, there was a problem with dislodgment; none of the various codes I entered managed to release a bike. It took eight calls to the help line to get to the automated voice system and ultimately to a human being. At this point I was running late and decided to take a cab to Manhattan and return home using a bike from the Pike and Monroe kiosk. As it happened, I had to ride back to Brooklyn from another station because that kiosk was shielded with blue tape, and none of the bikes was usable.

In April, Brooklyn Spoke looked at Bellafante’s earlier critiques of the program.

Mettle: Documentary about People Who Collect Recyclables for Cash