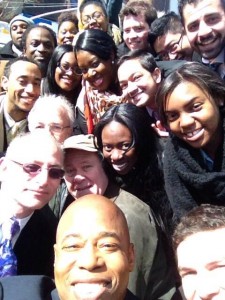 Yesterday Brooklyn beep Eric Adams and members of the Downtown Brooklyn business community gathered to celebrate free wifi coming to the Fulton Mall. What did they do to mark the occasion? Take selfies of course!

We're taking #selfies on the Fulton Mall with the @DowntownBklyn to celebrate the launch of #free #wifi! pic.twitter.com/1O2qstnVKl

NYDN: WiFi along the eight-block Fulton Mall will eventually expand from Tillary Street to Schermerhorn Street and Cadman Plaza West to Flatbush Avenue in Downtown Brooklyn.
The service is expected to also hit open areas at the Ingersoll and Whitman Houses in the future, officials said.
The Downtown Brooklyn Partnership, a nonprofit business booster, spearheaded the project with a grant from the city Economic Development Corp.’s Wireless Corridor Challenge.