“Your Mother Should Know” by the Beatles came on the radio. I have heard this song perhaps as many times as there are grains of sand in the River Ganges; yet for the first time I realized THIS SONG IS A TURD.  If a cotton candy machine (hidden in the greasy, cobweb-laced cellar of a disused and abused Vaudeville theatre now repurposed as a sex club) was able to develop a rectum, and that well-muscled and finely clenched orifice shat out a coiled piece of velveteen SHIT laced with Splenda, this expertly-wound BOLUS would be “Your Mother Should Know” by The Beatles. 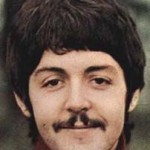 Paul McCartney, around the time he made a musical turd.

This Mento-flavored infusion of over-clever hookery (bereft of edge or even the bile-colored rainbow of irony) defies the spirit of discovery and adventure that defined 1967, but not in a rebellious or prescient way (as similar exercises by the Kinks did); instead, “Your Mother Should Know” is an asinine prodigies’ shriek to be liked and to be admired, to be seen as timeless, in other words, better than it’s time.

“Your Mother Should Know” utterly lacks the thorny point of view or originality that, say, the spectacular Bonzo Dog Band would have brought to the proceedings.  The Bonzos trafficked in revisiting and re-inventing the 1920s tropes that McCartney explored here, but the Bonzos bought a true dose of adventure, invention, dada, and near-revolutionary fervor to the proceedings.  The Bonzos did this kind of thing and waved the flag of Tristan Tzara; McCartney does it and waves the flag of Ukulele Ike. The Bonzos would have approached a song like this the way Magritte would have approached an apple or Picasso would have approached a woman’s profile; they would have seen it from all sides, including dimensions that defied normal vision.  Likewise, the Kinks (or the Small Faces, who also dabbled with faux-archaic material) would have tackled it as a musical adventure, attempting to construct an emotionally rich piece in an antiquated style using contemporary instruments and production techniques. But Paul McCartney, on the other hand, does none of that; not only is he JUST trying to reproduce the sound of a bygone era, he is also INSISTING we be impressed by how well he does it.


And that’s exactly what McCartney is doing here: he is trying to impress the adults.  Conversely, with something like “Yesterday,” I genuinely think he was trying to impress his peers; in other words, with “Yesterday” McCartney was saying “I can reach you via a different palette than the one we – the generational we — might normally use;” he was also likely referencing a somewhat-underground (for U.K. and U.S. listeners) tradition of hyper-emotional French balladry. So hooray for “Yesterday.” See, believe it or not, “Yesterday” actually had an edge and a point of view that “Your Mother Should Know” completely lacks.  But “Your Mother Should Know” is an edge-less exercise (and a well-executed one, too, which actually makes it worse – that’s why I prefer the similar but utterly ham-fisted “Winchester Cathedral”), and it is most loathsomely and criminally committed to tape NOT to emotionally reach or move the listener (as “Yesterday” or even the inferior but delightful “Michelle” did), BUT JUST TO IMPRESS US BY SHOWING US HOW WELL HE DOES THIS THING.  McCartney is precisely like one of those moon-faced children you see in supermarkets who pick up a box of cereal and loudly announce “Mother, I hear excellent things about this product and suggest you buy it.” And everyone within hearing thinks “Awww, isn’t that darling, he sound so adult!”

By the way:  this piece was only indirectly about the mewling, faux-velvet-covered piss-puddle of forced smiles called “Your Mother Should Know.”  It was really about

Even the Beatles sucked sometimes.  Their very vulnerability created their genius, made them experiment and invent fearlessly, made them strive for the delicious angles of mortality instead of the boring ecru shades of mediocrity. Somehow, over the years the idea has developed that if you love the Beatles, you have to insist on their infallibility; you have to believe that every instance of Paul’s establishment-pleasing musical pleas for immortality is perfect, every expression of John’s angry sexism is perfect, every time George Harrison steals a sliding riff from Peter Green it is perfect, every time Ringo inelegantly whacks the crash-cymbal in a musically meaningless way that does nothing to enhance the song it is perfect.   Kill your fucking idols, man.  If you really love the Beatles, embrace the idea that they were real people who made mistakes, and did things for contaminated motives.  Because I never could trust anyone who did not believe that all beauty comes with infallibility.  I mean, shit, the first Boston album is pretty much perfect, but not one single person would accuse them of being the Beatles. There is no great art that boasts infallibility; this is why Warhol and Picasso will be remembered long after Rockwell.

Somehow, we set the Beatles apart; we consider them the one group exempt from the essential law of infallibility.  Just stop it.  It does them no honor, and lessens the magic of extraordinary, nearly flawless achievements like The White Album and Abbey Road.  The magic of the Beatles evolved, and like anything subject to the laws of nature, evolution, and impermanence, it is bound to be ridden with imperfection. And along the way, mistakes were made.  And I proudly announce, as a huge admirer, fan, and student of the Beatles, stating that “Your Mother Should Know” is a turd does not in any way make me less of a lover of the music or the achievements of the Beatles.