I tend to give U2 the benefit of the doubt because, let’s face it, a band that popular could have been a hell of a lot worse. U2 have been the biggest rock band on earth for about 30 years now (only Metallica have even vaguely given them a run for their money), and generally they’ve done artistically dynamic things and consistently used their fame and money to benefit the planet. So, hooray for U2. I mean for god’s sake, they could have been Bon Jovi (not that Bon Jovi suck, but their range is limited and their grasp is shallow; I mean, a band largely based on continuously re-writing Thin Lizzy’s “Cowboy Song” can’t be taken that seriously, can they?).

As the industry refined, redefined, re-set, and generally defenestrated in the last 30 years, there have been radically few “new” long-haul classic rock bands: apart from U2 and Metallica, there’s Def Leppard, Bon Jovi, and, uh, I’m a little stuck here. R.E.M. probably over-aspired (much like the Kinks did in the ‘70s/’80s – i.e., they were a very strong cult act whose transition into the large-scale mainstream consciousness never felt completely right); Guns’n’Roses, who had the artistic goods more than they’re given credit for, went up in a pyre of self-indulgence; potential Classic Rock heroes like Pearl Jam, Soundgarden, and Rage Against the Machine either didn’t sustain fan interest in newer material or didn’t conserve breath for a long run; and Radiohead disappeared so far up their own asses that they can wave hello by sticking their fingers out their mouths. I’ll also throw Porcupine Tree in there, because if there ever was a band that should be regarded as the other credible classic rock band to emerge in the last few decades, it’s them. Oh, accuracy compels me to note Germany’s Die Toten Hosen, who are the very definition of a classic rock act who combine quality and longevity, but no one outside of freaking Germany, where they are as big as U2 or the Stones, has heard of them.

(Die Toten Hosen, the biggest classic rock band you’ve never heard of; posted here because who really needs to see another U2 video? Also, can I mention that I figured out, WITHOUT emailing John Loscalzo, how to insert a link into an article [that thing about my encounter with U2 in 1980]? This achievement makes me happier than Alma Mahler and Oskar Kokoschka on a date in Vienna in 1912, during the really healthy early days of their relationship.)

All things considered, U2 were a pretty rare combination of “gigantic” and “good.”

Until now. A lot of people are jumping on U2 right now, and here’s why I’m joining in: 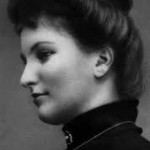 This is Alma Mahler, whose beauty inspired many of the great artists of her time, like Franz Werfel, Gustav Mahler, Oskar Kokoschka, and Walter Gropius.

Let’s start with the ludicrous method of distribution, i.e. the new U2 album just appearing in people’s iTunes accounts. This is a very slippery fucking slope; a U2 record is pretty fucking benign, but what if it wasn’t? What if something that espoused some political or social doctrine just fucking APPEARED on our computer? What if Apple decides to endorse some candidate, or the Chinese compel Apple to take some stance, and propaganda just starts dropping into our computers unannounced? See, it really doesn’t make a difference if it’s U2’s new album or a copy of the Protocols of the Elders of Zion, someone coming into my fucking computer and giving me a pile of anything I didn’t ask for is a no-no, and sets a very bad fucking precedent.

Equally as offensive to an old punk didact like me is the use of iconic punk rock images in U2’s new video. 36 years after U2 debuted, they have bizarrely decided to prove how “punk rock” they are by using some (very) basic and over-used images of the Clash, the Ramones, Patti, etcetera in their release campaign. Let’s put this in some context:

U2 were never a punk band, nor did they try to be, nor did they need to be. However, both in terms of stance and sound, they were greatly influenced by a few fundamental punk rock bands, notably the Skids and Stiff Little Fingers. The wonderful Skids were probably U2’s biggest overt influence: they perfected a form of charging, Celtic-scented rock with over-reaching vocals and tumbling, echoing, ticking and spitting guitar; in fact, the Skids’ influence on U2 was so strong that they took pains not to acknowledge it until 2002 when they suddenly covered, with Green Day’s help, the Skids’ anthem “The Saints Are Coming” (though it was the Skids’ “Into The Valley” which was, in many ways, the Rosetta Stone for the early U2 sound). Secondly, U2 liberally borrowed Stiff Little Finger’s point of view (and not a little of their slightly-proggy punk rock sound) and even some of their song titles. U2 were also clearly influenced by very credible punk-era acts like The Only Ones, the Stranglers, PIL, and the Ruts.

Which is all to say that only in a moment of great and unwarranted insecurity – or the misguided desire by a new manager to enact a “re-boot” by somehow linking the band with “punk rock, maaaan” – would U2 need to PROVE to anyone how “punk rock” they are. It’s just fucking unnecessary, and offensive, too, because the bands’ referenced in the new video are so clichéd as to make you think U2 know absolutely nothing about punk rock, which just isn’t true. Seriously, the bands in the clip are the same bands fucking One Direction or Taylor Swift would put in a video if they wanted people to think they were punk rock. By trying to appear credible, they’ve made themselves seem like fucking idiots, and that’s just totally pointless, because they are not idiots.

Which is all to say that U2, a band who have always more or less done the right thing on stage and off, have finally jumped the shark, in fairly resounding and unforgivable fashion. Friends, they are done. Irish Fucking Toast. Is there such a thing as Irish Toast? I mean, is it a thing, like Texas Toast, or Irish Soda Bread? I mean maybe it is or more likely it isn’t, but you get the idea. It took a while, but U2 have finally released their Steel Wheels; i.e., the album that marks the point beyond which one can firmly say no one gives a damn about your new material.

So long, U2. It’s been good to know you. Now go fuck yourselves for coming into my computer uninvited.