I’ve been thinking about college rock, indie rock, whatever you want to call it, this thing that defines the listening habits of over-sensitive young white people, this entity that makes us feel superior to the person sitting across from us on the F Train who looks like they listen to Maroon 5.

I was reflecting on bands from the 1970s like Tin Huey, Pere Ubu, Sneakers, the Shoes, even Suicide, who toured and released non-major label vinyl before there was a clearly delineated college rock touring, radio, and indie label circuit. But around the early-ish 1980s, college rock/indie rock seems to have become a more-or-less recognizable and consistent concept. Can we pinpoint a moment when a loose amalgamation of non-mainstream artists independently releasing records became this thing we readily identify as college rock and indie rock? Surely, there had to be a eureka moment, some kind of invention of the alt-rock wheel, probably around, oh, 1980.

And I think I found it.

His name was Sal Locurto. And if there was a Hall of Fame for College Rock, Sal Locurto has to be in the first class of inductees. 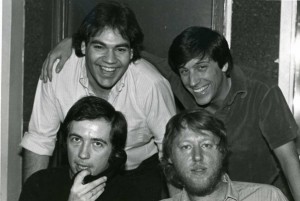 In early 1980, an NYU student named Sal Locurto took over the college radio station WNYU. Specifically, Sal reformatted a slot of programming between 4 and 7 PM, which he dubbed “The New Afternoon Show.” I should also note (this is very important) that at the time WNYU had a giant signal; it could be heard clearly throughout the entire metro New York/tri-state area (i.e., a circle of about 50 – 75 miles in diameter, with Manhattan at the center). But WNYU’s power was not solely responsible for its’ influence. Sal made a commitment that the New Afternoon Show on WNYU would play only alternative music that could not be heard on any commercial radio station in New York City; the New Afternoon Show would play new alternative music and nothing but new alternative music, no exceptions. This meant that virtually all the music played on The New Afternoon Show would be import-only British music not available on American major labels (this was everyone from New Order to Department S to the Specials and about 800 more), or independently released American music (Lyres, Neighborhoods, Bongos, ESG, Liquid Liquid, Our Daughter’s Wedding, Dead Kennedys, many etceteras).

You might be thinking, “What’s the big deal about that? The college station in my town in 1977 was playing really cool shit.” True, but Sal and WNYU did a couple of things very differently: first, the “old style” college radio station would spin Elvis Costello and the Jam, then they’d play the Allman Brothers and Cat Stevens; you’d be listening to a DJ playing Wreckless Eric, then when you tuned in an hour later, some guy would be playing nothing but Jaco Pastorius and Coltrane. The traditional college radio station had zero consistency. Sal changed that, and changed the definition of college rock dramatically, turning WNYU’s core afternoon programming block into an outlet exclusively for new music. Secondly, Sal passed down the edict that although the music might be highly unconventionally, the mode of delivery wouldn’t be: DJs were to back-announce (i.e., say the name of the songs played and identify the station) after every second song, no exceptions, and DJ segments were to be taut and informative, as opposed to the bong-laced indulgent blabbering heard on other college stations.

Soon, something remarkable happened: Sal’s commitment to exclusively playing new music and presenting it with a professional veneer led to publicists, clubs, and labels recognizing that WNYU could be used to promote their shows and their bands. You could fill a local show by a touring British alternative or American independent act just by getting the record played on WNYU, and the band showing up on air to plug the gig. I honestly believe that the model for new music promotion that existed throughout the 1980s (and into the ‘90s), and new-music marketing groups/conventions like New Music Seminar and CMJ (College Music Journal), owe their naissance to Sal Locurto and WNYU; Sal was literally the first person to create a radio outlet solely for independent and import-only music that was strong and consistent enough to be used as a promotional tool. 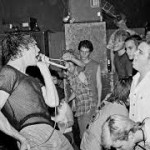 Black Flag, doing their thing, around the time Henry Rollins threatened to kill me, but that’s another story

Now, around the same time, Black Flag started touring endlessly with no concern for label support, proving that an independent act could keep themselves afloat and create a legend just by beating the crap out of a van, sleeping on fans’ floors, and selling a lot of t-shirts and vinyl at the venue; certainly, other bands had done this, but Black Flag made it a ceaseless way of life, and the model they created lasts until this day. Also, in late 1981-ish, R.E.M., by following the touring disciplines created by Black Flag, Minutemen, et al and adding the charismatic marketing touches that had been introduced in the wake of the promotional model invented by and for the New Afternoon Show, became the first non-hardcore band to use-the-tour-to-death/visit-every-college-radio-station-to-death/sleep-on-floors-until-you-want-to-die model and combine it with a charm and niche-filling sound that had the potential to one day go entirely mainstream; in other words, R.E.M. were the first post-SST/post-WNYU act to take all the lessons of the new way of doing business as an indie/college rock act, and ride it to the toppermost of the poppermost. 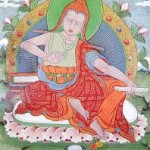 Chandrakirti, who lived about 1350 years before Henry Rollins

I’ve run out of a will to type further – a fairly academic but compelling commentary on Chandrakirti’s Sevenfold Reasoning is calling my name. I mean, “Living beings are seen to be transient and empty of inherent existence, like a moon in rippling water.” That doesn’t have anything specifically to do with this piece, but I’ve moved on to the Chandrakirti. Oh wait it doesn’t have to do with this piece but it has to do with EVERYTHING ELSE.
Be Sociable, Share!