You have surely noticed that the Internet is absolutely lousy with these lists where someone assigns a band to each letter of their name. Perhaps you have even compiled one of these yourself.

For the most part, these lists are self-effacing yet bursting with arrogance, a way for our friends to remind us of all the cool bands they like, such as Wire and the Feelies and John Zorn (by the way, no one actually really likes John Zorn; it is, however, very possible to like him theoretically. In this sense, he is to music what Joyce’s Ulysses is to literature). These alphabetical musical biographies are not easy to compose, so they are all literally trembling with intent. In my opinion, this letter/band exercise is an ultra-indulgent waste of time; but then again, I am of the opinion that humans should spend a lot more time discussing the TV show I’m Dickens, He’s Fenster.

So, I’m going to join the fun! 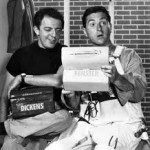 T is for The Kinks. Because when I was young, I studied the Kinks the way others studied the Beatles (as I detailed here). Sensitive, poetic, acutely observing, self-destructive, monstrously clumsy yet delicate, espousing doe-eyed love and dumb-angel lust,the Kinks epitomized the maddening hot-and-cold experience of being a touchy and skeptical teenager, and they did this better than any other band. The Kinks’ mixture of fey flippancy, monkish self-reflection, and garage-rock bumbling made the Beatles frippery and the Stones’ mannishness seem positively mainstream; they were exactly what a delicate, uncertain outsider like myself needed to guide him through the garden-maze of the horrors of high school. Thank you, Kinks.

I: Impaled Nazarene. Because the future belongs to death metal. Even if you hate the genre – shit, better if you hate it – the flag of the armies of the disenfranchised, the barely employed, the lovers of the loud, the haters of the ‘normal,’ all of these things we thought ‘punk rock’ stood for, is flown far, far better by death metal. It’s extreme shit, and death metal underlines the fact that all us fools who thought Television or the Dictators were extreme were just totally full of shit. And it’s ten times more popular than punk rock ever was. And even if much of it sounds like Rush played by bikers on speed, a lot of it is really, really fucking good.

M: The Move. Because they are one of the three most underrated bands of all time (the others being the Damned and the Small Faces, as explained here), and because they were virtually a precise cross between the Beatles and the Who, and at the same time they presaged Sabbath. That’s hot.

O is for Opeth. Because while you were busy trying to convince me that I should listen to Neutral Milk Hotel and insisting that the freaking world revolved around Wilco, a pile of bands who evaded the hipster radar were making strange, extreme, and thoughtful music of massively high quality. Usually, I consider Porcupine Tree the prime example of this – a band who consistently do what people think Radiohead do – but since there is no ‘P’ in my name, I’ll go for Opeth, who make shimmering, intense music laden with art and intention, starshine and aggression, and who sound like Pink Floyd if they morphed with Slayer.

T: Trouble. Because when metal really sucked, when it was a lot of hair bands mixing drums WAAAY too loud and re-cycling the most obvious aspects of Slade and Hanoi Rocks very, very badly (and WORST OF ALL creating the idea of the “Power Ballad,” which is to music what Dr. Mengele was to Twins), Trouble summoned the ghosts of Budgie, Blue Cheer, and Sabbath and released chunky, sinewy, slithering, riff-filled oily slabs of rock that anticipated the best aspects of stoner and doom metal while somehow making us realize that Black Flag’s overly-sincere attempts to ROCK were pale imitations of the real thing…the real thing being Trouble. Jesus Christ I just re-read that and realized that was ONE long sentence.

H is for Hey, I didn’t mean to disparage Wire, because they are one of the best bands ever. Like Werner Von Braun, most musicians aim for the stars, and imagine themselves purveyors of great, immortal art and perfection; like Werner Von Braun, most musicians just desire to make a big hit in London, where they will sadly be confused by the tipping protocol and pretend that Blur are a lot more important than they actually are (I am a little confused about that metaphor, too, probably because I am still busy thinking about I’m Dickens He’s Fenster). Between 1977 and 1979, Wire achieved what virtually no other band has ever accomplished: they attained perfection, releasing three consecutive flawless albums. Seriously, Layne, how many bands have released three straight albums that are literally immaculate in execution and conception, and which reveal a mixture of startling energy, challenging artistry, and remarkable melody? If 1977s Pink Flag is the most joyful, immediate, and shocking of this trio, perhaps the most rewarding is ‘78s Chairs Missing, which adds a profound intensity and intimacy to the punk vocabulary, and integrates almost pastoral melodies into the gentle tsunami of Wire’s art-punk, post-Eno sound. Yeah.

Y: Young Marble Giants. Along with Durutti Column, YMG invented the possibility of quiet punk, blowing a great wisp of gentle into the post-punk world without losing any of the power.

Now, I’m not going to bother doing the last name, I mean my last name, other than to note this: Many years ago, when I was a resident of the Weinstein Center for Student Living at NYU, I lived next door to a rather extreme and kind wit named Larry Kase. One day in the cafeteria, Larry politely inquired about a song I was playing over and over during the autumn of ‘79, and which he could hear through the wall; see, he was rather surprised that someone had recorded a number called “Here Comes Tim Sommer.” He was, of course, misinterpreting the Undertones song “Here Comes The Summer.” And if you listen to it through the wall, yes, indeed, it does sound like “Here Comes Tim Sommer.” So, the remaining letters in my name — S, O, M, M, E and R — is for “The Undertones.”

Don’t Know Much About History: The 10 Albums Kanye West Must Listen to Before He Makes a Bigger Fool of Himself