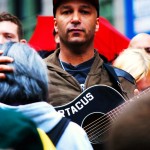 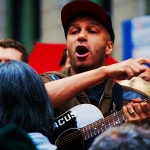 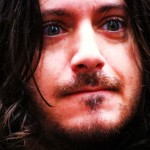 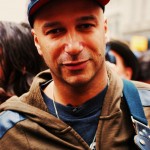 Rolling Stone: Tom Morello paused for a moment as he tuned his guitar in front of the Occupy Wall Street masses this morning at New York’s Liberty Plaza. “This is crazy out here,” he said, smiling. The Rage Against the Machine guitarist went on to perform a four-song set for hundreds of onlookers, including a poignant, protester-fueled rendition of Woody Guthrie’s “This Land Is Your Land.”

Before the performance, however, Morello addressed the crowd – whom he called “friends.” He introduced himself as the Nightwatchman, his folk alter-ego, and spoke directly to the attentive and excited members of the Occupy Wall Street movement: “First, they ignored you – then you got pepper-sprayed.” But he didn’t stop there. Morello led the crowd in a charged chant: “I know in my heart, all hell can’t stop us now.” And then, repeatedly, “All hell can’t stop us now!”