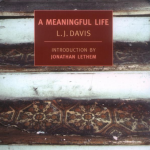 Lowell Lake, just graduated from Stanford University in the early 1960s, gets married right after college graduation. On a whim, he turns down a graduate scholarship to Berkeley, and moves with his new wife to New York City. He tries writing a novel; when that doesn’t work out, he becomes the managing editor of a plumbing trade publication. He drifts apart from his wife, but saves his money for several years.

And in about 1970 he buys a house in Brooklyn. The house, a crumbling mansion on the Fort Greene section of Washington Avenue, is home to any number of poor tenants: drug users, illegal immigrants, and more. Despite his discomfort as the rare white man walking the streets of Fort Greene, Lowell single-handedly takes on the decay of New York. He throws out the many tenants. He demolishes partitions, and hires contractors to strip and restore the house. Obsessed with his house, Lowell tries to protect it from squatters. Disasters, only some of them predictable to homeowners, ensue.

Reading the book now, 40 years after its publication, when Brooklyn is hip and New York City has rebounded, is revelatory. Davis enmeshes the reader in Lowell’s pioneering efforts at gentrification. He describes but doesn’t comment on Lowell’s casual displacement of poor black and Hispanic tenants. Davis paints a lovely portrait of a mid-century New York woman, Lowell’s mother-in-law (to be, when we meet her). It’s clear to us she’s Jewish, but Lowell misses that entirely. It’s as good a portrait of a member of an oblivious majority culture as I’ve read. In his introduction, Jonathan Lethem, who grew up down the street from Davis, says that the early Brownstoners “set the groundwork for the disaster and triumph of Brooklyn’s slow-motion gentrification, so full of social implications and ethical paradoxes.” We’re still living with the ramifications.

No matter how or where we develop—Atlantic Yards, downtown Brooklyn, Fourth Avenue—someone is going to be displaced. On the other hand, we get to live here. Please read the book first. Then discuss in the comments.

Have a book you want me to know about? Email me at asbowie@gmail.com. And check out my other blog about metrics.